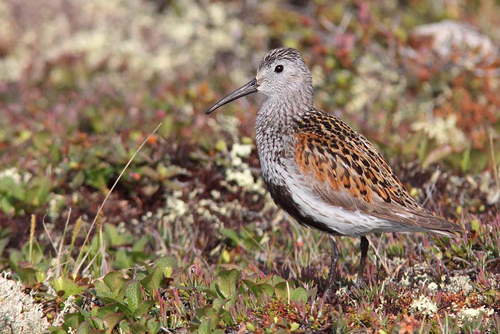 Characteristics and Range Unmistakable in breeding plumage, with rich rufous upperparts and a black belly patch on white underparts, the Dunlin becomes grey-brown with few distinctive markings in non-breeding plumage, earning it the English name Dunlin ("little dun") and the French name "variable". This sandpiper has a circumpolar range, breeding across northern Europe and Siberia, and in coastal Alaska, Northwest Territories (disjunct), and the central Canadian Arctic south to Hudson Bay. All populations winter in the northern Hemisphere, in North America along the Atlantic coast from southern Nova Scotia to the Yucatįn Peninsula and on the Pacific coast from southern Alaska to Nayarit, Mexico, and sometimes farther south (Warnock and Gill 1996). The Dunlin that breed in and migrate through Manitoba are of the eastern hudsonia subspecies that is heavily streaked in breeding plumage.

Distribution, Abundance, and Habitat The Dunlin's breeding range in Manitoba, as described in The Birds of Manitoba, and elsewhere, is primarily along the Hudson Bay coast. Atlas records are indeed mostly within 70 km of the coast; however, probable breeding was recorded at Nejanilini Lake >160 km inland, which suggests some localised inland nesting in the far north. There were no atlas records east of the Nelson River, but nesting is known to occur along the Hudson Bay coast of Ontario, though no farther than 40 km inland there (Peck 2007). Analyses of both relative abundance and probability of observation emphasize this species' reliance on coastal tundra, with densities decreasing inland, and suggest similar rates of detection in the Wapusk National Park region and the Arctic Plains & Mountains. In Manitoba, the Dunlin is typically found nesting in open, wet peatlands and sedge meadows, and can be seen foraging in shallow tundra pools and exposed mudflats (pers. obs.), which may explain its coastal distribution and limited occurrence inland. The Dunlin was found in the fewest atlas squares (71) of any northern shorebird (excepting the mysteriously scarce Semipalmated Sandpiper); however, it was detected on more point counts than Semipalmated Plover, Hudsonian Godwit, and Short-billed Dowitcher. This suggest strong clustering by narrow habitat requirements, with the densest clusters averaging one individual per point count (five squares).

Trends, Conservation, and Recommendations The Canadian population of Dunlin is relatively large, estimated at over 750,000 birds, but population trends are difficult to determine. Migration counts suggest declines, prompting an assessment of Moderate Concern in the Canadian Shorebird Plan (Donaldson et al. 2000). Better monitoring and understanding of population-level effects due to habitat degradation, contaminants, lead ingestion, hunting, disturbance by humans and domestic animals, and even scientific research (evidence of high costs to handled birds) are all urgently need (Warnock and Gill 1996).