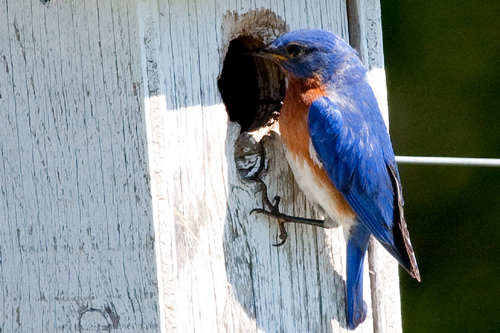 Characteristics and Range When sunlight catches the intense blue feathers of the male Eastern Bluebird, a sparrow-sized thrush, one is awed by the sapphire glow of the head, back, wings, and tail. The blue contrasts with the rufous-orange throat and breast and white belly. Females are plainer, blue in the wings with grey-blue on the back, and a duller breast. The Eastern Bluebird nests widely across mainland eastern North America, with eastern Saskatchewan representing the western range limit but with recent reports as far west as Calgary. Migratory populations winter in the southeastern U.S.A, Mexico, and Central America and overlap with resident populations in these areas (Gowaty et al. 2015).

Distribution, Abundance, and Habitat Distribution, Abundance and Habitat The distribution of the Eastern Bluebird documented by the atlas differed little from that depicted in The Birds of Manitoba, with high occupancy across most of the Prairie Potholes (49% of surveyed squares) and the Boreal Hardwood Transition (53%), except the most intensively agricultural areas of the former and the easternmost portion of the latter. As described in the The Birds of Manitoba, detections became much more infrequent and patchy northward in the Boreal Taiga Plains toward The Pas, although detections in 12 squares (including confirmed breeding) in the southern Boreal Softwood Shield suggest a slight northward range expansion (or at least new documentation) on the east side of Lake Winnipeg. The Eastern Bluebird nests in open woodlands with high vantage points for hawking insects (wires and poles are readily used). It is scarce in dense forest. This limits its distribution in the boreal biome to cleared or burnt areas, or other openings, where cavity-bearing snags remain or nest boxes are provided (or poles with woodpecker holes). It is often seen, singly or in family groups, along wooded edges, in aspen parkland, oak woodland, and farms where tree cavities or nest boxes are available for nesting.

Trends, Conservation, and Recommendations Once scarce in Manitoba, the Eastern Bluebird did not become fully established here until the late 19th century; however, it later began experiencing declines, especially in the 1960s (The Birds of Manitoba). These declines led Jack and Norah Lane and the "Brandon Junior Birders" to establish thousands of kilometres of "bluebird trails" with nest boxes placed along fence posts, leading to the creation of the "Friends of the Bluebirds" group in 1959. Long-term BBS data show ups and downs but an overall gradual increase since 1970. The ready use of nest boxes is likely a principal cause of the recent westward spread and increased prevalence in western Manitoba, where the Eastern Bluebird may now out-compete the Mountain Bluebird (which also benefitted from nest boxes). The Eastern Bluebird was formerly outnumbered by the Mountain Bluebird in southwestern Manitoba, except in wooded sandhill areas, but it is now the dominant bluebird there. Despite this increase, threats include pesticide use, winter mortality, and competing cavity users, especially the European Starling (preventable in boxes with a small entrance) and Tree Swallow (reduced by box placement in sets of two).