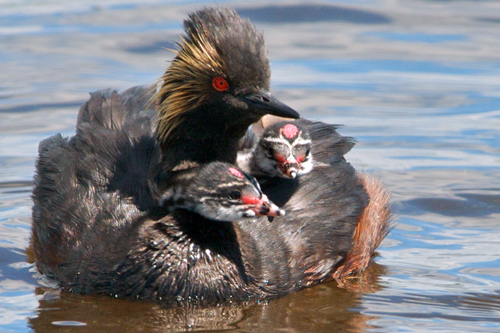 Characteristics and Range The species name nigricollis (black neck) indicates one of the most salient breeding-plumage features of this small grebe. Breeding across the Northern Hemisphere, mostly within a band from 35° to 55°N, but also with some resident populations in Sub-Saharan Africa, the Eared Grebe is the most numerous grebe species in North America and in the world (Cullen et al. 1999). North American populations breed primarily in the Great Plains and Great Basin regions, from the Prairie Potholes of Manitoba and southwestern Minnesota west to interior British Columbia and south to California and northern New Mexico. They winter along the Pacific coast from British Columbia south to Baja California, as well as from southern California east to Texas and south to Guatemala.

The Eared Grebe prefers saline habitats in the non-breeding season and during migration, including huge post-breeding congregations at Mono Lake, California and Great Salt Lake, Utah. Due to major cyclic changes in muscle mass, organ size, fat deposits, and to a lesser extent moult, the Eared Grebe experiences what are arguably the most prolonged periods of flightlessness of any flying bird, totalling up to 10 months per year (Cullen et al. 1999).

Distribution, Abundance, and Habitat This species is almost entirely restricted to the Prairie Potholes in Manitoba, with just nine occupied squares in the southern Boreal Taiga Plains and one in the Boreal Hardwood Transition. Within the Prairie Potholes, the probability of observation is highest in the southwest corner. Given the high levels of precipitation during the atlas years and this species' ability to breed in ephemeral wetlands when water levels permit, the atlas distribution, with confirmed breeding in 69 of 182 squares, is likely to be above the long-term average. Perhaps related to this concentration in southwest Manitoba, the disappearance of once-iconic colonies from Oak Hammock Marsh is remarkable (Gardner 1981).

Eared Grebes are colonial nesters, generally choosing large marsh complexes with reeds and open water, but also nesting in temporarily flooded fields and ditches in southwestern Manitoba (K. De Smet, pers. comm.). Colonies are often small but can reach 500 nests (The Birds of Manitoba). Nesting colonies are not necessarily found from year to year in the same sites but may move with variable water levels and conditions (Cullen et al. 1999). Studies in Minnesota found colonies typically in marshes >3 ha with 42–100% open water that were relatively shallow and had fewer perimeter trees compared to unused wetlands, and were lacking public access to nesting areas.

Trends, Conservation, and Recommendations The Eared Grebe is not threatened globally and its numbers appear to be stable (no significant long-term BBS trend in Manitoba or in Canada). This species requires highly productive wetlands with thriving macroinvertebrate communities and is therefore rarely found breeding on waterbodies with fish (Cullen et al. 1999).  For this reason, in addition to general drainage and habitat loss, proposals to build overflow channels on terminal basins such as Whitewater Lake, which risk seriously altering the invertebrate community, are of great concern for some of Manitoba's largest colonies of Eared Grebe.