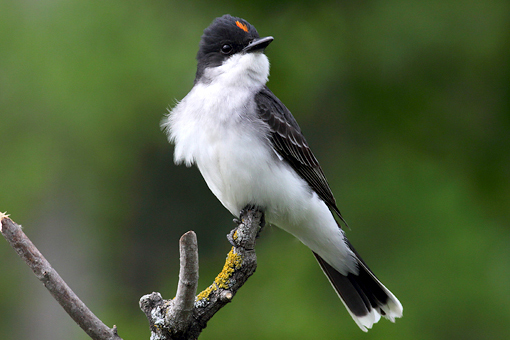 Characteristics and Range With its contrasting black back and white breast and white band on the tip of the tail, the Eastern Kingbird is readily observed conspicuously perched on prominent vantage points from where it aggressively defends its breeding territory from would-be intruders. This species breeds from the east coast of North America through the Great Plains to portions of the northern Rocky Mountains, north to the edge of the Canadian Shield, and as far west as the coast of southern British Columbia. It winters entirely in South America from Colombia to northern Argentina, becoming less insectivorous and more frugivorous on the wintering grounds (Murphy 1996).

Distribution, Abundance, and Habitat The distribution documented by the atlas maintains the core range of the species, but extends the northern limit by roughly 250 km compared to that depicted in The Birds of Manitoba.  This is probably not a true range extension, but rather the result of increased observation. The Eastern Kingbird breeds across the prairies and to a lesser extent north and east through the boreal regions, primarily the more open agricultural areas in the southern portion of the Boreal Taiga Plains, and more sporadically and at much lower densities in forested areas north to the edge of the Boreal Softwood Shield. Its distribution in the latter region is tied to natural (e.g., beaver swamps) and anthropogenic (e.g., forested areas flooded by altered drainage) openings. It is noticeably lacking through the Porcupine Hills and Duck Mountains. Relative abundances are highest throughout the Prairie Potholes, followed by the Boreal Taiga Plains, the Boreal Softwood Shield, and finally the Boreal Hardwood Transition. Interestingly, the Boreal Hardwood Transition had the second highest probability of observation for this species after the Prairie Potholes. This may be because multiple visits increased detections, or perhaps because human activity in this BCR has resulted in more anthropogenic openings and increased accessibility, compared to other forested regions.

Trends, Conservation, and Recommendations BBS data suggest this species has declined significantly, in both the 10-year and long-term periods, in Canada and Manitoba. Notable local declines have been observed in the southeastern part of the province including the city of Winnipeg. Large-scale declines may be linked to pesticide use throughout the species' range (Murphy 1996).  Given its propensity to nest and forage near roads, collision with vehicles remains an important cause of mortality. Declines in eastern North America are likely associated with habitat loss through forest succession and human development (Murphy 1996).  The opposite holds true for western North America, where open habitat prevails and where smaller declines in certain areas suggest the species may benefit from the protection and maintenance of wooded areas such as shelterbelts, abandoned farmyards, and riparian habitat.