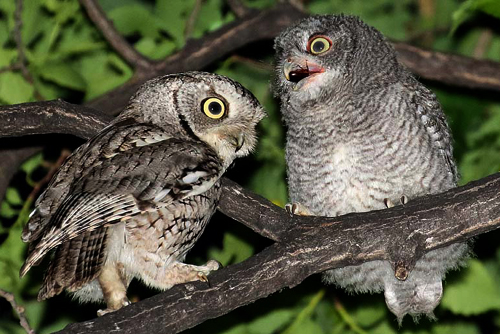 Characteristics and Range This is Manitoba's smallest owl with ear-tufts. Although two main colour morphs exist, grey and red, ~99% in Manitoba are grey (Artuso 2009a).  The Eastern Screech-Owl is resident throughout the deciduous-dominated eastern forests of North America, with its southern range limit in subtropical forests and its northern and western range limit in the Prairie Potholes, but only where tall, deciduous, cavity-bearing trees occur. It is present year-round in Manitoba, though home-range size increases dramatically in winter (pers. obs).

Distribution, Abundance, and Habitat In Manitoba, this species is strongly tied to riparian habitat, especially in suburbs and towns within the Prairie Potholes, and hence has a very patchy distribution. Atlas breeding records, some in natural cavities and some in Wood Duck boxes, were in towns including Winnipeg, Brandon, Morden, Altona and Lyleton and along watercourses including the Red, Assiniboine, Seine, and Souris Rivers. There were no detections at the extreme northern edge of the range as drawn in The Birds of Manitoba, such as Selkirk and Dauphin, where breeding was confirmed in 1995 (Walley and Clyde 1996). Since Manitoba is at the northern range limit of this species, and it may have only reached Manitoba in the early 20th century (Artuso 2009a), it occurs in very low densities here. Artuso (2009b) estimated the Winnipeg population at 60 ± 4 territorial males, with highest densities in moderately populated suburbs along rivers.

Trends, Conservation, and Recommendations Due to its predominantly suburban distribution here, the Manitoba Nocturnal Owl Survey has limited detections of this species. It would benefit from urban planning and strategic maintenance of mature riparian habitat, especially in areas where tall trees are typically removed for vistas to rivers. This species could also benefit from a small number of well-placed nest boxes in suburbs and other suitable habitat.