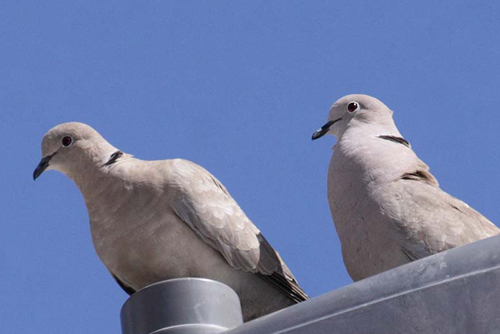 Characteristics and Range The Eurasian Collared-Dove is a fairly large dove, characterized by a partial black band around the nape on a mostly pinkish-grey body. It is bulkier and considerably paler than the Mourning Dove, with a white-tipped square tail. The repeated coo-COO-cook song (slower than a Black-billed Cuckoo, with different emphasis) and harsh flight calls are distinctive. The Eurasian Collared-Dove is one of several non-native dove species in North America. Originating in Asia, it spread through much of Europe in the 1900s and through North America from the early 1980s. It is believed that released and escaped birds reached Florida from the Bahamas and possibly Guadeloupe (Ramagosa 2012). The species then spread rapidly in a northwesterly direction. It is now present in most of the U.S.A., except for the northeast and Alaska, in parts of Mexico and in the southern fringes of the Prairie Provinces, including Manitoba, and west to British Columbia. The species was officially added to the Manitoba bird list in 2003 (The Birds of Manitoba). Wintering is largely in or near the nesting areas and no true migration occurs.

Distribution, Abundance, and Habitat Eurasian Collared-Doves were found in 22 squares (2%) in the Prairie Potholes, all from the Red River valley west. The records were widely scattered, primarily in small towns and at farmsteads within about 100 km of the U.S. border, with the exception of an outlying report from the Russell area (up to a dozen birds present in the town of Strathclair since 2013 were missed, J. Bradley, pers. comm.). This species is nowhere common and there are too few records to determine relative abundance. The probability of observation is generally low, but with a slight increase in the Morden - Winkler area (mildest climate). In the post-atlas period, numbers already appear to have increased in Glenboro and Portage La Prairie, both with counts ˃20 individuals. In Manitoba and elsewhere, Eurasian Collared-Doves prefer small towns or suburban areas with feeders and seed sources, planted trees for roosting, nesting and shelter, and exposed, elevated singing perches; they avoid heavy forest.

Trends, Conservation, and Recommendations The Eurasian Collared-Dove continues to expand its range in North America. Like Mourning Doves, Eurasian Collared-Doves are susceptible to loss of toes from frostbite and may suffer considerable mortality in severe winters (a Manitoba Museum specimen from March, 2017 appears to have perished from exposure to severe weather, R. Mooi, pers. comm.). Manitoba appears to be near the limit of this resident dove's temperature tolerance and, while small populations in some towns such as Deloraine have persisted, others such as in Lyleton have petered out. Small towns in southern Saskatchewan such as Weyburn and Mortlach were colonised earlier and have generally supported more robust populations (first record at Langham in 1998, first occupied Mortlach in 2001, Krðtzig, in press). Cold winters appear to be limiting the spread of the species throughout Manitoba.