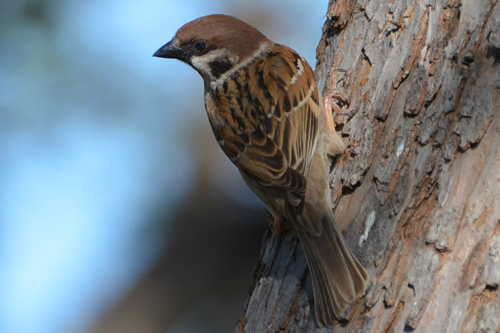 Characteristics and Range The Eurasian Tree Sparrow resembles a male House Sparrow, but has a whiter cheek, with a prominent blackish spot, the white extending into a collar on the bird's nape, and a rich brown crown. Unlike the House Sparrow, there is no sex difference in plumage. Native to much of Eurasia, and introduced into North America near St. Louis, Missouri in 1870, it has spread into Illinois and southeast Iowa as a breeder and year-round resident (Barlow et al. 2017). Three individual Eurasian Tree Sparrows, confirmed by photos, were found in Manitoba in 1986, 2013, and 2014. The first and third remained for several years after their discovery, both eventually producing hybrid offspring with House Sparrows, but there is no evidence of any breeding during the atlas period.

Trends, Conservation, and Recommendations The Eurasian Tree Sparrow expanded from its initial release point, primarily along the wooded valleys of the Mississippi and Missouri Rivers, but then stalled in the early 20th century (Barlow et al. 2017). In recent years, however, numbers have increased in the core range, as documented by the BBS and CBC and, especially since the 1980s, there has been an increasing number of extralimital records (Barlow et al. 2017). Hybridization of pioneer birds with House Sparrows may be a barrier to establishment of the Eurasian Tree Sparrow in Manitoba and elsewhere.