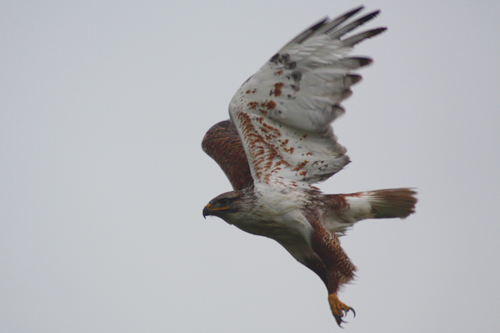 Characteristics and Range The Ferruginous Hawk is the world's largest buteo and named for the rusty highlights in its plumage. Although dark-morphs do occasionally nest in Manitoba, well over 95% of our birds are light-morphs, told in flight from Red-tailed Hawks by their snowy-white underparts, a paler tail, dark rufous feathered legs, and prominent rusty shoulder patches. A resident of expansive grasslands, the Ferruginous Hawk breeds from southeastern Alberta east to southwestern Manitoba, and south to northern Arizona and the Texas panhandle. Its winter range extends from northern California east to central Kansas, and south into central Mexico.

Distribution, Abundance, and Habitat The Ferruginous Hawk is an open-country hawk that preys extensively on ground squirrels, but if these are scarce, it will also capture pocket gophers, rabbits, and sometimes birds. This hawk generally avoids heavily treed parkland habitat, landscapes with extensive agricultural cultivation, and grasslands near yards, extensive road networks, and other disturbances. Nonetheless, a scarcity of expansive, undisturbed grasslands in Manitoba has led to it frequently nesting in suboptimal habitat (De Smet and Conrad 1989). During the atlas period, Ferruginous Hawks were documented nesting in a total of 35 squares; all of these were in the extreme southwest (north to Pipestone and east to Boissevain), except for one confirmed and one probable breeding record south of Glenboro. Sightings occurred in five other squares north and east to Brandon and Rock Lake. The eastern portion of the breeding area documented by the atlas, from Whitewater Lake east to Rock Lake and Glenboro, was only occupied in the first two years, with almost no records in 2012 and 2013 and with only one record near Whitewater Lake in 2014, and with no documented breeding since then.

Trends, Conservation, and Recommendations The Ferruginous Hawk was once uncommon but regular throughout southern Manitoba from the Red River west, but it declined rapidly here and elsewhere after European settlement, disappearing as a nesting species in Manitoba during the 1920s, with few sight records until it recolonized in the early 1980s (Thompson [Seton] 1890, Ratcliff and Murray 1984, De Smet and Conrad 1989). After re-establishing, nesting populations increased rapidly to 55 nesting pairs by the mid-1990s (De Smet 1993) but, since then, much wetter than normal conditions and decimation of ground squirrel numbers have resulted in persistent declines. During the atlas period, Ferruginous Hawks declined from 41 to 18 nesting pairs in Manitoba, and further to <10 pairs in 2017 (pers. obs.). The number of ground squirrels, their main prey, have been very low in these years, at least until 2016. Loss and deterioration of habitat due to continuing conversion of prairie to cropland, invasion of trees and shrubs on the prairies, and persecution of raptors in general, have all contributed to declines (Bechard and Schmutz 1995). Today, however, landowners welcome having this species nearby. The provincial Wildlife Branch installed nearly 400 nest structures and platforms in the southwest from 1985 to 2000, and half to three-quarters of Manitoba's nesting population uses artificial structures annually (pers. obs.). Although populations have rebounded slightly from historic lows, and current tree or pole nesting (as opposed to former ground nesting) has increased productivity, the species is still considered Threatened federally and Endangered provincially, due to ongoing habitat loss.