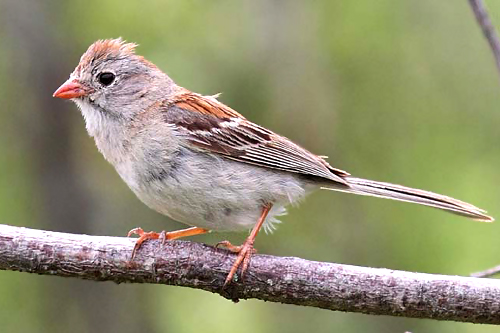 Characteristics and Range The Field Sparrow resembles a small American Tree Sparrow but has a pink bill, prominent pale eye-ring, and spotless breast. The male's song is an accelerating series of sweet, canary-like whistles. The breeding range extends across most of the central and eastern U.S.A. from eastern Montana to southern Maine, southward almost to the Gulf Coast from central Texas to the Florida panhandle. It reaches Canada mainly in southern Ontario and southern Quťbec, with rare occurrence in Saskatchewan, Manitoba, and the Maritimes. Its winter range includes the southern two-thirds of the breeding range but extends farther south to the Rio Grande valley, the Gulf Coast, and central peninsular Florida (Carey et al. 2008).

Distribution, Abundance, and Habitat Atlas effort added four Field Sparrow records to a provincial total now approaching 50 (including migrants and one winter visitor). The four atlas records (three possible and one probable breeding) were scattered across the extreme south from near Souris in the west to Piney in the east; other provincial records extend as far north as Riding Mountain National Park and near Traverse Bay (Victoria Beach). The Souris bird was seen and heard repeatedly (with suspicion of a second bird) in 2014, 2015, and (after the atlas period) 2016. There was a similar, previous three-year series of observations at a quarry near Seddons Corner, 1981–1983 (Taylor 1983, The Birds of Manitoba). Field Sparrows favour shrubby, uncultivated fields, sometimes in the early stages of succession back to forest, as well as early successional stages in forested areas after burning or clear-cutting. They nest on the ground or low in shrubs and saplings. Woody vegetation appears to be an essential habitat component, so the Field Sparrow tends to avoid intensive agriculture (Carey et al. 2008). The only two confirmed Manitoba nesting records occurred within Winnipeg city limits, but preceding much recent suburban sprawl and infill, in 1960 and 1974 (The Birds of Manitoba).

Trends, Conservation, and Recommendations The Field Sparrow continues to be an occasional (currently near-annual) summer visitor and likely breeder in extreme southern Manitoba. Despite almost range-wide decline linked to changing land uses, it is not a species of special conservation concern (Carey et al. 2008), and occurrence in Manitoba is too rare and peripheral for any conservation measures. Nevertheless, maintenance of old fields, quarries, and power line rights-of-way in a semi-wild state of early succession may benefit this species among many shrubland birds.