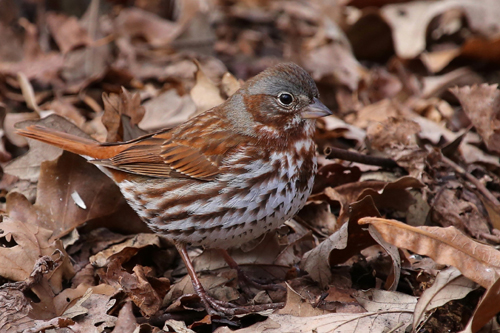 Characteristics and Range Aptly named for its fox-red plumage (iliaca group or red Fox Sparrow as found in Manitoba), this large sparrow is a northern breeder and a familiar passage migrant in southern Manitoba. It breeds in a band from Alaska to Newfoundland, mostly from 50° to 70°N, and in the Rocky Mountains south to Colorado and in the Pacific Coast Ranges south to California. The red Fox Sparrow winters along the Atlantic coast from the Bay of Fundy south to Florida and westward, south of the Great Lakes, to eastern Texas and rarely farther west (Weckstein et al. 2002). Western subspecies, considered by some to be three distinct species, winter along the Pacific coast from the Alaska Panhandle to Baja California (Weckstein et al. 2002).

Distribution, Abundance, and Habitat The Fox Sparrow breeds across northern Manitoba south to at least Playgreen Lake, as depicted in The Birds of Manitoba. Atlassers found southern outliers in both the east and the west: in a cluster of nine squares near The Pas (depicted in Weckstein et al. 2002 as a disjunct breeding area in Manitoba and Saskatchewan), the only occurrences within the Boreal Taiga Plains; and in two squares on the east side of Lake Winnipeg near the Berens and Pigeon Rivers. This species was not detected in the Duck Mountains, where Thompson [Seton] (1890) indicated they bred in 1884. Both relative abundance and probability of observation showed a pattern of peak occurrence in the Taiga Shield & Hudson Plains, decreasing southward into the Boreal Softwood Shield and northeastward into the Arctic Plains & Mountains and along the Hudson Bay coast. The relative abundance was highest of all in the northwest corner of the province.

In the breeding season, the Fox Sparrow is primarily a bird of thick shrub and dense stunted forest with small openings used for ground foraging (Weckstein et al. 2002). In Manitoba it can be found in willow and alder thickets, dense spruce and tamarack bogs, shrubby forest edge, roadside shrubs such as willow in wet ditches, dense young aspen clones, and in regenerating forests following fire or timber cutting (pers. obs). At least in Oregon, logging activity that opened up dense forest created expansion opportunities for this species (Weckstein et al. 2002). The southern outliers discussed above may be examples of the species' ability to colonize newly available second growth. The records near The Pas were in shrubby riparian areas with red-osier dogwood (Cornus stolonifera) and areas of fire regeneration with surrounding deciduous woods (D. Raitt, pers. comm.).

Trends, Conservation, and Recommendations BBS data show significant increases since the 1970s in both the Taiga Shield & Hudson Plains and the Boreal Softwood Shield. However, the reliability of these trends is relatively low due to the species' northern (hence poorly surveyed) distribution in eastern Canada. Partners in Flight estimated a population increase of 23% from 1970 to 2014 based on multiple data sources including the BBS and CBC (Rosenburg et al. 2016). Any investigation of the mechanisms of increase would need to consider the availability of new habitats, increased shrub growth related to climate change, and increased survival related to climate change or perhaps even the prevalence of bird-feeding along the migration routes and on the wintering grounds.