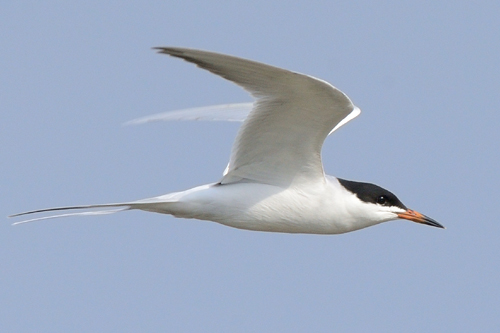 Characteristics and Range Of all the Manitoban terns, Forster's Tern is the palest in colouration. A bird hovering over a marsh in bright sunshine stands out even at a distance, flashing its silvery-white wings. At closer range the black-tipped orange beak is obvious. In addition, this tern can usually be distinguished from its congeners by its preference for marshy habitats. It breeds exclusive in North America, in a number of disjunct areas, the most prominent being the Prairie Provinces, the Dakotas and Minnesota, and parts of the Great Basin. Smaller populations are scattered between these two regions, along the Gulf Coast and around the Great Lakes. Wintering takes place from California and Chesapeake Bay south to Central America (McNicholl et al. 2001).

Distribution, Abundance, and Habitat The distribution documented by atlassers agreed in large part with that estimated in The Birds of Manitoba with virtually all records from the region west of Lake Winnipeg. The one exception was an extension to the east and northeast of Lake Winnipeg, with possible and probable breeding in marshes near Gods Lake, Oxford Lake, Washahigan Lake, Slemon Lake, and the Bloodvein River. It is unlikely that this extension is recent, but rather that the region had been poorly surveyed in the past. Occupancy at a relatively low 11% of squares in the Prairie Potholes and 7% in the Boreal Taiga Plains reflects this species' association with large marsh complexes. Occupancy was minimal in the Boreal Softwood Shield and the Boreal Hardwood Transition. Relative abundance was greatest around Lakes Manitoba and Winnipegosis, at the south end of Lake Winnipeg and in the Whitewater Lake area, with the probability of observation highest around Lake Manitoba. Forster's Tern is usually colonial (2 - 325 pairs, Koonz and Rakowski 1985), nesting in fresh, brackish and saltwater marshes (in Manitoba exclusively in freshwater). It prefers nesting among floating and emergent vegetation and forages in the more open, deeper portions of marshes, generally in wetlands with considerable open water (McNicholl et al. 2001).

Trends, Conservation, and Recommendations Although formerly exploited for hat-making, Forster's Tern populations appear to have recovered (McNicholl et al. 2001). Despite low reliability, because terns and colonial species are poorly surveyed by point counts, BBS data suggest long-term stability in Manitoba and Canada.  Alterations to or loss of wetlands remain the greatest threat. More regular monitoring of nesting colonies and their changes over time in Manitoba is highly desirable.