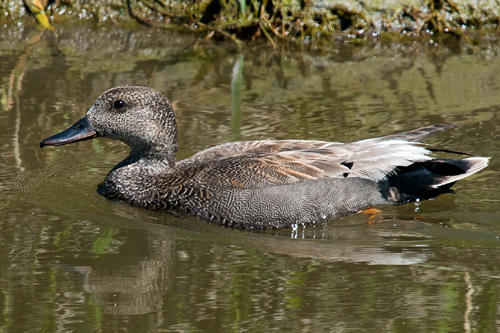 Characteristics and Range The male Gadwall is slightly smaller than a Mallard, with a subtly marked plumage consisting mostly of greys, browns, and black. At close range the fine vermiculations on the flanks stand out as particularly handsome. The most striking field marks are the black undertail and uppertail coverts and the white speculum, conspicuous in flight. Females have a mottled brown plumage. In North America, the Gadwall breeds from the Aleutian Islands across the Prairie Provinces to the St. Lawrence River valley and south through much of western U.S.A., the Great Plains and the Midwest. It winters primarily in the southern half of the U.S.A. and northern Mexico. The Gadwall is also widespread in northern Europe and Asia (Leschack et al. 1997).

Distribution, Abundance, and Habitat Both the distribution and abundance maps show that the Gadwall's breeding range is concentrated south of Riding Mountain National Park and west of the Manitoba Escarpment, with a secondary concentration around the south basin of Lake Manitoba. The species is thinly distributed through the Interlake, in areas north and east of Lake Winnipeg, and along the Hudson Bay coast. About 58% of surveyed squares in the Prairie Potholes were occupied, mainly in the southwest of this BCR, while 11% of squares in the Boreal Taiga Plains were occupied, the percentage being tiny elsewhere. The Gadwall nests in tall, dense vegetation near water, often on islands. Due to this habitat selection, the species experiences a higher nest success rate than other prairie-nesting ducks (Leschack et al. 1997).

Trends, Conservation, and Recommendations Trends and Recommendations Habitat loss and degradation from the 1960s to the 1980s led to declines, but numbers have rebounded in recent decades due to more favourable circumstances. Long-term BBS data show that this increase has been slow but steady since the late 1980s, commencing with the onset of the current wet cycle in and near southern Manitoba, which has created more breeding habitat. Being a widespread species worldwide, the Gadwall is not a species of conservation concern. Nevertheless, ongoing drainage of marshes and other wetlands and intensive cultivation practices continue to pose a threat.