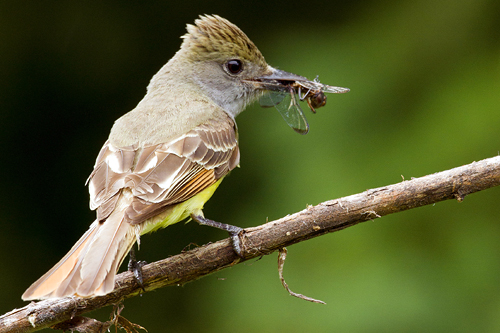 Characteristics and Range With its bright yellow belly, rufous in tail and wings, and police-whistle call, the Great Crested Flycatcher is easily identified in Manitoba, where it is the only member of its large genus of confusingly similar species. It breeds in eastern North America south of the boreal biome and east of the Great Plains grasslands, but with a narrow band extending west along the boreal-parkland transition from southern Manitoba to extreme eastern Alberta. It winters from southern Mexico to northern South America with a few overwintering in extreme southern Florida and Cuba (Miller and Lanyon 2014).

Distribution, Abundance, and Habitat The Great Crested Flycatcher was found across southern Manitoba, as depicted in The Birds of Manitoba, but with two northern outliers just south of The Pas. As such, it is one of a suite of species with a preference for deciduous woodlands that disappear, decline sharply, or become increasingly localized, north of a line from the Porcupine Hills to Waterhen, Gypsumville, and the Winnipeg River system (see also: American Woodcock, Black-billed Cuckoo, Yellow-throated Vireo, Warbling Vireo, and Eastern Towhee).

The peak relative abundance followed the deciduous-dominated boreal-parkland transition. Relative abundance generally decreased away from this transition zone with lower abundance as one moves northward in the Boreal Taiga Plains and into the southernmost Boreal Softwood Shield. Abundance also decreased westward within the Prairie Potholes with the exception of forested islands of the Manitoba Escarpment where deciduous trees dominate, such as the Turtle Mountains, and wooded river corridors. Although never reaching 80%, the probability of observation was also highest along roughly the same diagonal band from southeastern Manitoba to the Duck Mountains. Although described as most common in second growth and forest edge (Miller and Lanyon 2014), in Manitoba it appears most common in mature riparian forests.  It is also found in relatively tall aspen-oak stands and in mixed woods but not in pure coniferous stands (Miller and Lanyon 2014). In suburban areas in Manitoba, it appears confined to river corridors, usually in large well-treed parks and other greenspaces (pers. obs).

Trends, Conservation, and Recommendations The Great Crested Flycatcher shows a slightly declining long-term BBS trend across Canada and in the Boreal Hardwood Transition as a whole but is stable in Manitoba. As a secondary cavity nester, its population density may be reduced by snag removal, as might occur in urban areas (Miller and Lanyon 2014). Nest boxes can be used to augment populations where necessary (Miller and Lanyon 2014). As with other insectivores, this flycatcher is sensitive to pesticide use and was found to be more abundant on organic farms in Ontario than on other comparable non-organic agricultural operations (Freemark and Kirk 2001).