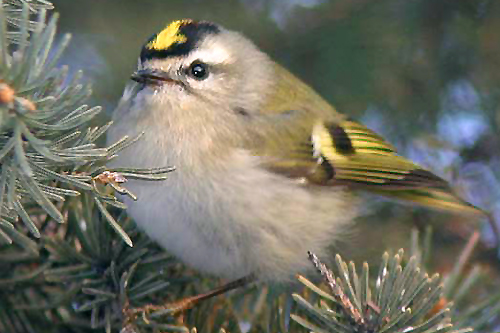 Characteristics and Range Among North America's smallest songbirds, the Golden-crowned Kinglet is distinguished by a boldly striped face and crown, the bright yellow median crown patch flushed with orange in the male. The high-pitched calls and song, which are near the limits of human hearing, combined with its densely forested breeding habitat, make the Golden-crowned Kinglet difficult to detect. The breeding range extends across Canada, including Newfoundland, northward to southern Alaska and southward in the mountainous regions of the U.S.A. Winter brings withdrawal from the coldest parts of the breeding range and southward movements as far as northern Mexico. The Great Plains represents a broad divide between eastern and western winter populations (Swanson et al. 2012). December records in southern Manitoba are not unusual, but overwintering is rarely recorded.

Distribution, Abundance, and Habitat Most atlas records were in the Boreal Hardwood Transition, Boreal Softwood Shield, and Boreal Taiga Plains, with more limited occurrence in the Taiga Shield & Hudson Plains and locally in suitable habitat within the Prairie Potholes. The overall range extends farther northeast than estimated in The Birds of Manitoba, based on observations near the Hayes and Nelson Rivers. The species was not found in the Spruce Woods area, where The Birds of Manitoba indicates an insular breeding population. Peak abundance and probability of observation were found east of Lake Winnipeg and in the major upland boreal islands of the Manitoba Escarpment. The high percentage of occupied squares in the Boreal Hardwood Transition can be attributed to relatively intense, season-long atlas coverage in southeastern Manitoba. While the high abundance east of Lake Winnipeg is derived from relatively low coverage of this area, it is adjacent to a zone of peak abundance in northwestern Ontario (McLaren 2007). This is likely associated with extensive unlogged stands of coniferous forest in these remote regions. Most sources indicate that the Golden-crowned Kinglet's preferred breeding habitat is mature spruce or fir forest and, secondarily, mixed forest with a large coniferous component. The nest is usually well hidden, high in a conifer, and breeding was most often confirmed (21 of 23 instances) by observation either of fledged young or of adults carrying food.

Trends, Conservation, and Recommendations Long-term BBS trends are divided, with mostly increases in eastern North America and decreases in the west, including Manitoba, although coverage is sparse in the boreal breeding range. While this is not a species of particular conservation concern, it would likely benefit if the initiative to designate a UNESCO World Heritage Site east of Lake Winnipeg is eventually successful. Elsewhere, breeding habitat is protected to varying degrees in provincial and national parks, but is vulnerable to fire and wind damage, as well as alteration (except in national parks) by extractive industries. The Golden-crowned Kinglet's adaptation to coniferous plantations has been noted in southern Ontario and several eastern states (McLaren 2007, Swanson et al. 2012) and may become important in replanted forest in parts of Manitoba.