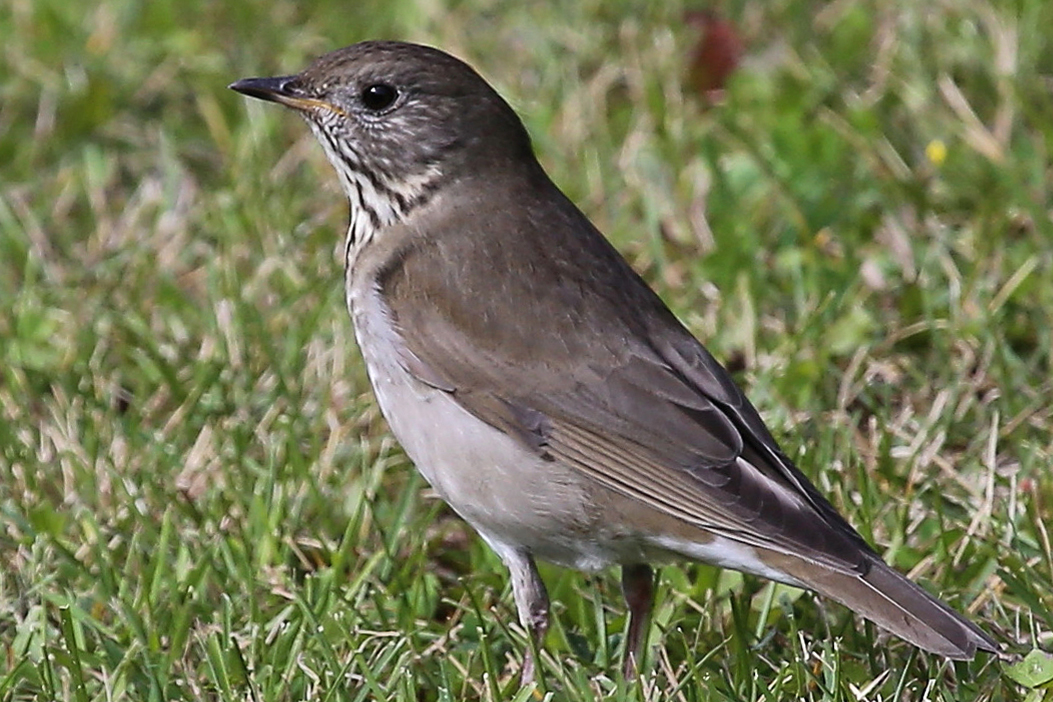 Characteristics and Range Secretive and clad in soft grey-browns, with few marking to distinguish it from other thrushes (other than the lack of reddish-brown or warm buffy tones), the Gray-cheeked Thrush is most readily found and identified by its calls and descending song, which has a zesty yet ventriloquial quality. This thrush is the northernmost of its genus and the only one to nest outside the Americas, its breeding range spanning the treeline-tundra transition and shrubby Arctic tundra from Newfoundland to Alaska and eastern Siberia. It winters primarily in northern South America but may be a scarce winter visitor to parts of Middle America (Lowther et. al. 2001).

Distribution, Abundance, and Habitat The Gray-cheeked Thrush was found breeding across northern Manitoba as far south as Lynn Lake, Gillam, and 100 km southwest of Shamattawa, which is marginally farther south than depicted in The Birds of Manitoba. Atlas data show that this species is strongly associated with the Taiga Shield & Hudson Plains (found in 53% of squares with ≥3 hours of effort) and the Arctic Plains & Mountains (42%) with very limited occurrence in the Boreal Softwood Shield (0.3%). In Manitoba this is a bird of northern conifer and treeline habitats, typically with some shrub such as willow or dense ground cover, and it is very difficult to observe in these habitats except when foraging on the ground at the edge of small copses or when in song (pers. obs.). The Gray-cheeked Thrush is not a bird of open tundra habitats per se. In the extreme northeast corner of the province, it was found in only four of 15 squares surveyed north of the Caribou River, in low abundance along the Caribou River itself and in dense willow along larger creeks. Atlas results show a pattern of increasing relative abundance from the southern range limit and the coast towards the northwest. This is consistent with the habitat preference noted above, as Manitoba's northwest corner has taller coniferous trees, interspersed with some open peatlands, than found in much of the Hudson Bay Lowlands. The highest abundances, where density averaged >1 bird per point count, were in six squares around Kasmere, Nueltin, Munroe, Stony, and Courage Lakes.

Trends, Conservation, and Recommendations As it breeds in the remote north and winters in South America, almost nothing is known of population trends in the Gray-cheeked Thrush. BBS data suggest a long-term decline in Canada, but the reliability is low. More study of this species' biology and threats are needed.