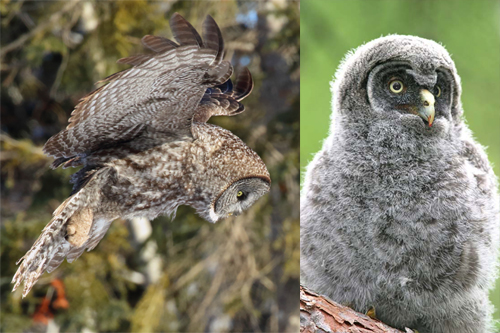 Characteristics and Range This large, round-headed owl with yellow eyes became Manitoba's provincial bird emblem on 27 September, 1985. Although it is North America's "tallest" owl, it is only 60% of the mass of the Snowy Owl. The North American nominate subspecies is found year-round in the boreal forest across Canada from British Columbia to Québec and south into a few adjacent areas of the eastern U.S.A, through the Rocky Mountains from Alaska to Wyoming, and south in the Sierra Nevada of California (where the yosemitensis subspecies occurs, Hull et al. 2014). Somewhat nomadic, with periodic movements and irruptions in response to prey availability, Great Gray Owls may disperse south of the boreal forest in winter, including within southern Manitoba. The paler lapponica subspecies is found in similar habitats across Eurasia making this the only "wood-owl" (Strix species) that breeds in both the Old and New World.

Distribution, Abundance, and Habitat Atlassers found the Great Gray Owl nesting throughout the Boreal Hardwood Transition, Boreal Taiga Plains, and Boreal Softwood Shield, with possible breeding evidence in five squares in the Prairie Potholes. These latter observations are consistent with this species' ability to disperse great distances and find boreal islands such as along Epinette Creek near Spruce Woods Provincial Park. Nonetheless, these southern records may correspond to non-breeding "floating" individuals, as the nearest confirmed nesting was in the Riding Mountain area. There were no atlas detections in Taiga Shield & Hudson Plains, despite sporadic nesting near Churchill (Jehl 2004). It is likely that northern birds were missed due to their typically low densities (despite localized pockets of abundance) and nomadic movements following 3-5-year cyclic breeding population fluctuations (Duncan 1992). In addition, there was limited early-season surveying (best for detecting owls) in northern and remote areas, as evidenced by the high percentage of occupied squares in the relatively accessible Boreal Hardwood Transition (more than triple that of any other BCR). The probability of observation was generally low throughout the boreal biome and its transition zones. The Great Gray Owl has been detected every year on the Manitoba Nocturnal Owl Survey, averaging one individual detected per 62.5 km surveyed (Duncan 2018).

In Manitoba and elsewhere, the Great Gray Owl hunts year-round in bogs, treed muskeg, along forest edges and in forest openings if sufficient perches exist (Duncan 1997). In winter, it occupies a greater variety of habitats, when individuals can travel up to 800 km in three months in search of prey, especially voles, before returning to distant summer nesting areas many times over their lifetime (Duncan 1992). Great Gray Owls do not build their own nest, using cup-shaped depressions in snags or stick nests built by Northern Goshawk, Broad-winged Hawk, Common Raven and others.

Trends, Conservation, and Recommendations A combined analysis of BBS and CBC data suggests the North American population of Great Gray Owls is stable, but caution is required in interpreting this result because of the species' nomadism (Rosenburg et al. 2016). Forest management plans that emulate fire disturbance yet also maintain mature forests are important for the persistence of this far-dispersing species (Duncan 1997). The Great Gray Owl is susceptible to West Nile Virus (at least in captivity), collisions with vehicles, especially if baited for photography, and rodenticides (Duncan 2016). Long-term citizen science monitoring programs such as the Manitoba Nocturnal Owl Survey should be maintained, assessed, and modified as needed.