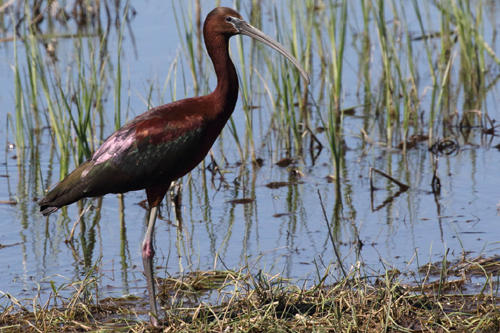 Characteristics and Range Glossy Ibis is the eastern counterpart of the very similar White-faced Ibis. Both birds are medium-sized waders with long down-curved beaks and dark red-brown and bronze plumage in the breeding season; at that time of year, when seen at close range and in good light, the Glossy Ibis's different eye colour and facial skin pattern are obvious. In late summer (from August) and fall, these species are extremely difficult to tell apart. The Glossy Ibis has both resident and migratory populations in Australasia, Africa, and southern Eurasia, but with a more limited range in the Americas centred around the Caribbean Basin. In North America, it breeds primarily along the Atlantic Seaboard from Maine to Florida and along the Gulf coast to Texas, and winters in the southern portion of the breeding range as well as at scattered sites in low numbers in Middle America. In recent years, especially since the early 1990s, there has been a notable expansion of the breeding range to the west (Patten and Lasley 2000).

Distribution, Abundance, and Habitat Glossy Ibis has been found at Whitewater Lake before, during and after the atlas years. Unlike the White-faced Ibis, which has been confirmed as breeding locally and is clearly expanding, there is no confirmed breeding of the Glossy Ibis, which remains rare in Manitoba. At least three individuals were present throughout the summer of 2017 (many observers, see accompanying photo). The difficulty in identifying the species and in accessing potential breeding areas have thus far stymied efforts to find a nest. At Whitewater Lake and elsewhere, ibises are usually found feeding in shallow water, in emergent vegetation or in wet pastures. If nesting were to take place, it would likely be in similar habitat to that of White-faced Ibis.

Trends, Conservation, and Recommendations Despite some retrenchment following a dramatic range increase in eastern U.S.A. from the 1950s through 1970s (Davis and Kricher 2000), this near-cosmopolitan species is not considered to be of conservation concern. It is nonetheless sensitive to environmental contamination and loss and/or degradation of wetlands (Patten and Lasley 2000).