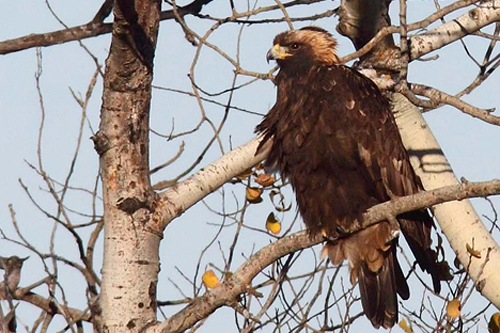 Characteristics and Range Most often seen soaring or gliding, the Golden Eagle is a large, dark-brown raptor with broad wings and a 2-metre wingspan. It is roughly the size of the more familiar Bald Eagle, but relatively longer-tailed, with a golden nape in all plumages. Young birds show white at the base of the tail and at the base of the primaries. Golden Eagles can further be separated from immature Bald Eagles by their more buteo-like shape and slight dihedral (V-shape) when gliding. The Golden Eagle is one of the widest-ranging raptors in the world, breeding across much of northern and western North America, most of temperate Eurasia, and northwestern Africa. In western North America, breeding is reported from Alaska to central Mexico, with scattered breeding extending east to Saskatchewan. In eastern North America, breeding is scarce and occurs in Ontario, Quťbec, and Labrador (Katzner et al. 2012). Although resident in much of its western range, northern breeders migrate south (or downslope) as far as northern Florida and Baja California (Kochert et al. 2002).

Distribution, Abundance, and Habitat One of the highlights of atlas data gathering was the confirmation of breeding Golden Eagles in northern Manitoba. Local breeding had been suspected for many years in the Churchill and Wapusk National Park areas. After sightings of four pairs along the Owl River in 2011, confirmation of nesting occurred during a canœ expedition on the Broad River in June, 2012 when three pairs were observed near stick nests in white spruce trees, with one adult on a nest, and white down feathers present on two nests (Asselin et al. 2013). In 2013, Parks Canada staff deployed a remote, motion-activated camera at one of the nests and captured photographs of nestlings. In North America, cliff nesting is more common (Kochert et al. 2002), but tree nesting has been documented in Ontario (Lumsden 1964, Sutherland 2007d), Montana (McGahan 1968), and Quťbec (Brodeur and Morneau 1999). The riparian white spruce trees used in northeastern Manitoba were the largest trees in a region lacking cliffs. Sightings ascribed to at least possible breeding came from 15 squares in total, although some squares had multiple records. Pairs were seen in the same locations along the railway south of Churchill in multiple years (C. Artuso, pers. obs.). The southernmost possible breeding locations were near York Factory and ~70 km north of Gillam.

Trends, Conservation, and Recommendations Although persecution through shooting, trapping, and poisoning is less prevalent than formerly, human activity still causes >70% of recorded mortality (Kochert et al. 2002). In western North America, nesting populations in Alaska and Canada are stable, but declines have occurred in the western conterminous U.S.A. (Kochert and Steenhof 2002). For the eastern population, migration counts indicate a stable or increasing trend since the 1970s (Kochert and Steenhof 2002), but the breeding range has been reduced and breeding is no longer reported in the eastern U.S.A. (Katzner et al. 2012). While the breeding habitat identified in northern Manitoba sees little use by humans, further research is needed to identify the migration routes and wintering grounds of these Golden Eagles.