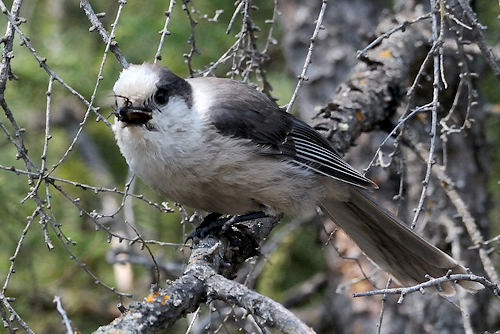 Characteristics and Range Famous for its soft plumage, silent flight, and confiding nature, the Canada Jay is an iconic resident of North America's subalpine and boreal forests (Strickland and Ouellet 2011). It is resident from Newfoundland to Alaska and along the Pacific Coast Range and the Rocky Mountains south to New Mexico. Although they will fearlessly approach camps and wilderness travellers for supplementary food, Canada Jays normally survive long and harsh northern winters by recovering cached berries, arthropods, fungi, and carrion. Copious, sticky saliva from enlarged salivary glands enables them to fasten food items behind flakes of tree bark or under arboreal lichens; remarkably, recovery seems to be through memory of specific cache locations. Stored food also permits Canada Jays to nest in late winter, with eggs sometimes incubated at temperatures as low as -30°C, and fledging peaking in early May, well before the June-July primary atlassing season. Although nest-building activity can be quite conspicuous as the jays forage widely for material, almost all confirmations of breeding status were from observations of juveniles still accompanying their parents. Fledgling broods break up in June, c. 6 weeks post-fledging, when the dominant juvenile forces its siblings to disperse from the natal territory. Ejected juveniles wander widely in search of a territory where they may gain acceptance from (unrelated) breeders that have no surviving young of their own (Strickland 1991). Observations of single juvenile birds in late June-July therefore did not constitute evidence of local breeding.

Distribution, Abundance, and Habitat Compared to The Birds of Manitoba the atlas provides a more detailed depiction of the southern range limits of Canada Jays in Manitoba but there is no implication of a change in distribution. Canada Jays were found in all of the province's areas of continuous boreal forest cover and in Riding Mountain National Park. The probability of observation was greater in the Boreal Softwood Shield than in adjoining BCRs, but was also high in the elevated portions of Riding Mountain, the Duck Mountains and the Porcupine Hills. The close association of Canada Jays with Manitoba's boreal forests is consistent with the apparent importance of conifers, especially black and white spruces, for food storage. The pliable, shingle-like structure of spruce bark is well suited for hiding food boli and experimental evidence suggests that the volatile resins may slow down the bacterial and/or fungal degradation of perishable food caches (Strickland et al. 2011).

Trends, Conservation, and Recommendations Since the 1970s, BBS and CBC data have shown stable population trends in Canada Jays, in both North America and Manitoba (Downes et al. 2011). Slow, long-term declines of over 50% have been reported, however, from the southern edge of the range in Ontario (Waite and Strickland 2006) and Wisconsin (Menebrœker et al. 2016). These declines have been provisionally attributed to increased temperatures leading to increased degradation of perishable Canada Jay food caches and resultant decreases in productivity, recruitment, and territorial occupancy. Although there are therefore concerns for southern peripheral populations, the species is thought to be secure.