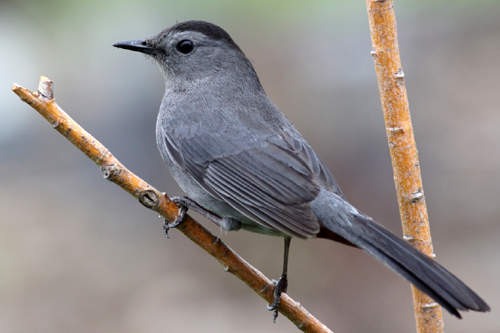 Characteristics and Range The Gray Catbird is slightly smaller and slimmer than the American Robin and entirely slaty grey, except for a black cap and rufous undertail coverts. It usually hides in dense shrubbery, but may perch in an exposed spot when singing. The song is highly varied, with less repetition or mimicry than that of the Brown Thrasher. The call note is a cat-like meow, hence its name. Gray Catbirds nest from southern British Columbia and central Alberta east to the Maritimes and south to the Gulf coast; they are absent as breeders from most of the west and southwest U.S.A. The winter range stretches from the Atlantic Seaboard and Gulf coast to the Caribbean and much of Central America south to Panama (Smith et. al. 2011).

Distribution, Abundance, and Habitat Gray Catbirds were widespread in the Prairie Potholes (detected in nearly 90% of surveyed squares) and in the Boreal Hardwood Transition (71%). They were also found in fairly high numbers in the southern Boreal Taiga Plains, but occupancy was negligible elsewhere. This distribution is quite similar to that shown in The Birds of Manitoba. Two outlying northerly records came from the Sundance area and from east of York Factory; the latter was a bird on territory. Relative abundance was highest in the southern Interlake, the area west of Lake Manitoba, near the mouth of the Red River and the region west of Riding Mountain. Some of the highest densities in the province previously occurred at the beach ridge at the south end of Lake Manitoba (The Birds of Manitoba), but this appears to no longer be the case. The cause is likely the loss of woodland, including understorey, due to severe storms and flooding in recent years. The species was notably scarce in the Turtle Mountains, the agricultural region of the Red River valley south and southwest of Winnipeg, and parts of Riding Mountain National Park and Duck Mountain Provincial Park. The probability of observation generally followed a similar pattern. The Gray Catbird's habitat consists of dense deciduous shrubbery, such as found in hedgerows, shelterbelts, suburban gardens, small woodlots, and beach ridges.

Trends, Conservation, and Recommendations Catbirds are relatively immune to cowbird parasitism, as they recognize cowbird eggs and will eject them from the nest (Smith et. al. 2011). Long-term BBS analysis shows a fairly stable trend, both in Manitoba and Canada-wide. This species has benefited from the clearing of forest, which has created openings and second-growth, and from the planting of shelterbelts and trees around farms on the previously treeless prairies.