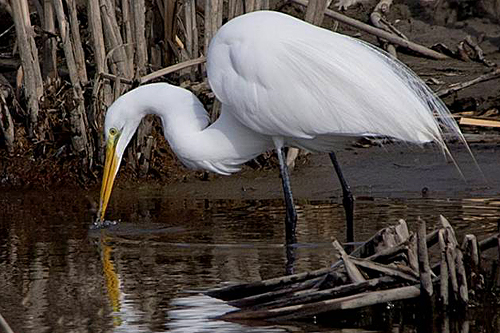 Characteristics and Range Manitoba's tallest white heron, the graceful Great Egret, provides a provincial success story. A cosmopolitan species found on five continents, it has recently become a well-established member of our avifauna. Although resident in much of its global range, most populations in the U.S.A. and Canada are migratory, with Manitoba lying at the northern edge of a cluster of localized breeding sites centred on the Mississippi River valley and the southern Great Lakes. Oversummering (non-breeding) birds do occur farther north elsewhere in Canada (McCrimmon et al. 2011). Migratory Great Egrets winter on both coasts (northward to Oregon and Maryland), across the southernmost U.S.A. and into Middle America; however, winter distribution is influenced by temperature and significant dispersal events also occur (McCrimmon et al. 2011)

Distribution, Abundance, and Habitat Historic records indicate breeding near Pipestone in 1955, the establishment of a colony at Dog Lake c.1974, and probable breeding at Riding Mountain National Park in 1979 (The Birds of Manitoba). Breeding has since been confirmed at West Shoal Lake (Koes and Taylor 2009) and Whitewater Lake (Koes and Taylor 2011). Dozens of birds were present during the breeding season at these two locations in prior years, indicating that local breeding likely commenced earlier.

The current cycle of wet weather in Manitoba, which began in the 1990s, has resulted in higher water levels at both the Shoal Lakes complex and Whitewater Lake, which in turn flooded stands of trees that were subsequently used for nesting by egrets and other species such as Bald Eagle and Double-crested Cormorant. The Dog Lake, Shoal Lakes, and Whitewater Lake breeding sites all feature flooded trees along with extensive marshland that is used for feeding. Most of the possible and probable breeding records are within 50 km of a known colony, and likely involved "commuting" birds searching for food, though satellite colonies may well exist. Late summer and early fall concentrations around breeding sites have numbered as high as 75 at Whitewater Lake (Koes and Taylor 2006) and 123 at West Shoal Lake (Koes and Taylor 2011), and as high as 60 at fall migration sites such as Oak Hammock Marsh (Koes and Taylor 2006).

Trends, Conservation, and Recommendations The recent trend of slowly increasing population size is expected to continue in the near future. The three known breeding sites are very difficult to reach, which limits the chance of human disturbance. As long as the current wet cycle continues, and adequate nesting habitat remains, the species should be relatively stable in the province. It is possible that other breeding colonies exist in the Oak Lake / Plum Lake region or in remote areas such as Lake Winnipegosis.