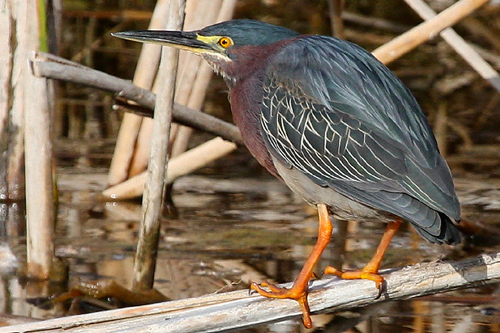 Characteristics and Range The Green Heron is very small, less than half the size of the Great Blue Heron, with blue-green upperparts and chestnut head, neck and underparts. It frequents wood-bordered stream edges and ponds, making it rather unobtrusive. It is one of only a few species of bird known to make use of "tools", in the form of small objects that are dropped in the water to attract fish. The breeding range stretches from southernmost Canada to the extreme north of South America, although most of the western United States is not occupied. In Canada the species is primarily found in extreme southwestern British Columbia, southern Ontario, and southern Québec. In Manitoba it is a rare visitor and occasional breeder. It winters along both coasts of North America and through the Caribbean and Central America, where resident populations also occur (Davis and Kushlan 1994).

Distribution, Abundance, and Habitat Probable and confirmed breeding was reported in only two locations-Winnipeg and Steinbach (in riparian greenspaces). At the latter location, birds were present from 2010 to 2013, with breeding likely occurring in each year. In 2010 the nest was about 2.5 m high in an ash tree and recently fledged young were seen nearby (Koes and Taylor 2011), while in 2013 a nest with two young was found (Koes and Taylor 2013b). Manitoba's first confirmed breeding took place at Tourond Creek, near Niverville, in 1991, although there was a strong suspicion of nesting in 1977 and 1980 (The Birds of Manitoba).

Trends, Conservation, and Recommendations There are 100+ Manitoba records since the Green Heron was first confirmed here in 1967, but no discernible trend since records became almost annual in the mid-1970s. The province is situated northwest of the current core breeding range of the species; hence there is no need for special conservation measures. This species, like many water birds, is sensitive to disturbance and care should be taken by photographers and birders not to disturb or publicize known nesting sites.