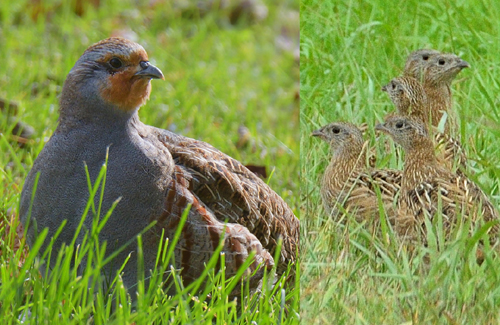 Characteristics and Range Smaller and less intricately marked than a grouse, the Gray Partridge is mostly grey and brown with rufous-barred flanks and a short, square, rufous tail; the male has a dark brown, hoof-shaped belly patch. The Gray Partridge is native to Eurasia, from Western Europe to Mongolia; it was first introduced to North America in the 1790s, and more successfully in the early 20th century, mostly from non-migratory populations (Carroll 1993). It became established in Manitoba in the 1920s and 1930s through a combination of local introductions and expansion from neighbouring regions. While it occurs locally across the continent from the Pacific Northwest to Nova Scotia, its primary North American range is within northern portions of the Great Basin and Great Plains, east to Wisconsin.

Distribution, Abundance, and Habitat Atlas records are mostly confined to the Prairie Potholes and southern Boreal Taiga Plains, barely reaching the Boreal Hardwood Transition. There are no records for the eastern and northern extremities of the range (from Lac du Bonnet to Hadashville and near The Pas, respectively), where occurrence was noted previously to be sporadic (The Birds of Manitoba). Point-count records were too few to yield a relative abundance map, while computed probability of observation is greatest in southern portions of the Prairie Potholes, mostly west of the Red River and south of the Assiniboine River. Preferred habitat is mixed farmland with sufficient (but not overly dense) shrubby and herbaceous cover for nesting and brood-rearing along fence-rows, shelter belts, and rights-of-way.

Trends, Conservation, and Recommendations Being non-native, the Gray Partridge is not a species of conservation concern in Canada. Nevertheless, it is generally considered an attractive and unobtrusive bird, able to endure modern prairie agriculture surprisingly well, albeit with fluctuating numbers and an overall, slight declining trend. Originally introduced for hunting purposes, it is subject to a regulated harvest in Manitoba, and hunting pressure is generally low. The attrition of vestiges of grassy cover to accommodate highly mechanized agriculture, combined with reduction of plant and insect foods by pesticide use, and increasingly early and frequent hay mowing, are likely the most important threats to the Gray Partridge in Manitoba. Reduced spillage of grain and seeds at storage bins and elevators may adversely affect winter survival, though this is perhaps offset by feeding at farmyards and rural bird feeders.