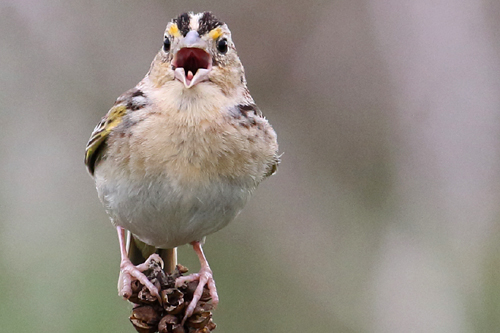 Characteristics and Range A small and inconspicuous sparrow named for its high pitched, insect-like song, the Grasshopper Sparrow has a rather restricted nesting range in Manitoba. Identification features include its plain buffy face with a white eye-ring, an unstreaked buffy breast, flattened head profile, and a short tail. It breeds throughout eastern North America south of the boreal biome except the Atlantic Northern Forest and the extreme south, as well as in a narrow strip in the west from extreme southern British Columbia to California. Its winter range spans the southern U.S.A. from southern California to South Carolina, extending south through Mexico and into Central America. Isolated resident populations occur in parts of Middle America and northern South America (Vickery 1996).

Distribution, Abundance, and Habitat Probably never common in Manitoba, the Grasshopper Sparrow was overlooked by early accounts and was first reported from Whitewater Lake in the 1920s (Taverner 1927). It occurs locally in fairly large and dense idle fields and hayfields, as well as in denser vegetation in moderately grazed pasturelands (De Smet and Conrad 1991, Vickery 1996). Generally preferring open grasslands, it avoids areas with extensive shrubs, and especially trees (Vickery 1996). Like Baird's Sparrow, the Grasshopper Sparrow temporarily increased in distribution and abundance in Manitoba during the major droughts of the late 1980s, but since 1990 has rarely been noted east of Carberry (The Birds of Manitoba). This suggests the species may be more common in Manitoba when drought pushes it to the wetter periphery of the Great Plains, or when high precipitation levels here, such as during the atlas years, stimulate tall, lush grasses. During the atlas period, Grasshopper Sparrows were found in 95 squares in southern Manitoba, 79% of which were in the southwest (Region 1), with most of the others (15%) occurring in south-central Manitoba (Region 2). It was also found in isolated squares in the southeast, the southern Interlake, and north almost to the Duck Mountains. Overall abundance was low as the species was found on less than 2% of point counts in the southwest, and on only 0.14% of point counts in south-central Manitoba. Both the relative abundance and probability-of-observation analyses suggest that a wedge from the southwest corner northeast to the Brandon area and the Assiniboine River is the core Manitoba range.

Trends, Conservation, and Recommendations Like many grassland birds, the Grasshopper Sparrow has experienced long-term declines in many parts of its range due to loss and conversion of grasslands. BBS data show a range-wide decline of >2% per year with the steepest declines in the east (Sauer et al. 2015). Management techniques that have been used to restore grasslands for this species include prescribed burning, grazing, and mowing (Vickery 1996). Regional conservation strategies such as the Conservation Reserve Program in the U.S.A. and the Prairie Pothole and Prairie Habitat Joint Venture of the North American Waterfowl Management Plan have been credited with creating lush grasslands suitable for Grasshopper Sparrows and other grassland birds (Vickery 1996).