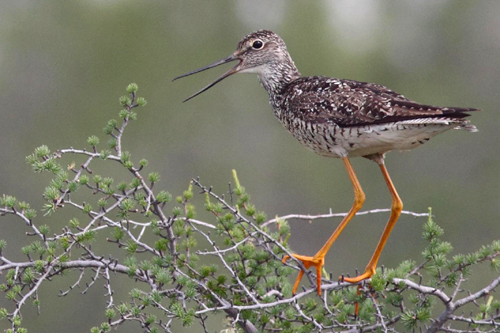 Characteristics and Range The Greater Yellowlegs is a tall, slender shorebird, white-speckled grey above and dark-barred white below in breeding plumage (other plumages are plainer). As well as being one-third larger than the Lesser Yellowlegs, it is more robustly proportioned. Incessant loud calling and agitated behaviour at the slightest amount of human intrusion make it easy to detect in nesting areas. It nests in a broad band across the boreal forest from Alaska to Newfoundland and Nova Scotia (Elphick and Tibbitts 1998); atlas records in Manitoba and elsewhere confirm Elphick and Tibbitts' suggestion that their estimated range limits are conservative (Burger 2015). The winter range extends from coastal and southern U.S.A. to the Caribbean, Mexico, and locally throughout Central and South America (Elphick and Tibbitts 1998).

Distribution, Abundance, and Habitat Atlas records show good representation across most of the boreal forest, with the southernmost concentration near Lake St. Martin and scattered more southerly records, mostly east of Lake Winnipeg. The southern range limit is difficult to define, however, because the gap between spring and fall migration is brief and some non-breeding birds linger all summer in southern Manitoba. Many southerly records were treated as non-breeders and not mapped. There is some evidence of northward creep of the southern range limit, based on historical breeding records in the northern conterminous U.S.A. (Elphick and Tibbitts 1998). The zone of peak abundance in central-northern Manitoba includes a large void in atlas coverage, and therefore requires verification; the more generalized weighting towards the north in the probability of observation map is perhaps more realistic. The extent to which far-northern and especially coastal atlas records represent post-breeding movements is uncertain. There is minimal evidence of nesting around Churchill, but there is a "decided influx" of adults to local ponds in late June, after which the species becomes a fairly common fall migrant (R. Koes, pers. obs., Jehl 2004). Atlas records include a nest with four eggs near the Owl River within 30 km of the Hudson Bay shore on 21 June, 2011 (C. Artuso), as well as confirmed breeding (distraction display) near Tadoule Lake (A. Guercio). The southernmost confirmed breeding included nests found near Lake Winnipeg 30 km south of Long Point on 6 May, 2010 and near Clearwater Lake on 30 May, 2011 (J. Kayer). Breeding habitat consists of hummocky terrain in extensive boreal bogs and muskeg with numerous small ponds and scattered trees (Elphick and Tibbitts 1998).

Trends, Conservation, and Recommendations Much research is needed on the Greater Yellowlegs' basic biology and hence its conservation and management (Elphick and Tibbitts 1998). The increasing population trends derived from BBS data are not statistically significant, and have limited value because of only peripheral range coverage. The Greater Yellowlegs is widely dispersed at all seasons; combined with an inaccessible and relatively unaltered breeding range, this may make it fairly resilient to environmental change. However, it is vulnerable to broad-scale landscape changes such as the attrition and deterioration of small and temporary wetlands (migration stopover sites) by increasingly intensive agriculture. South of Manitoba, modern agriculture has incidentally provided important staging and wintering areas in the form of flooded rice fields. Recently, Manitoba Important Bird Area Program surveys have started contributing to much-needed monitoring of this and many other shorebird species.