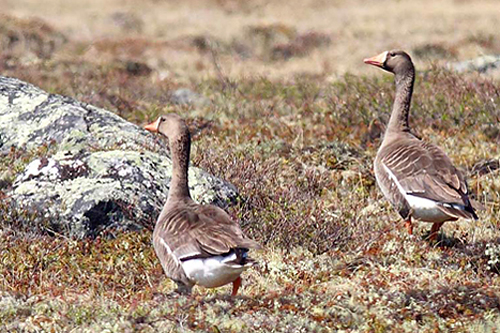 Characteristics and Range Similar in size to the Snow Goose and with a dappled brown, grey, black, and white plumage, orange legs, and pink bill bordered by white feathers, the Greater White-fronted Goose is distinctive in Manitoba (other similar Anser species from Eurasia do not occur here, although occasional escapees and hybrids are sometimes mistakenly reported as Greater White-fronted Geese). This species breeds across the central and western North American Arctic, western Greenland, and northern Siberia, and migrates to southern temperate climes in winter (Ely and Dzubin 1994). Although considered to be a passage migrant in Manitoba, atlas fieldwork found evidence that this species may breed in the province's far north. North American Greater White-fronted Geese winter along the Pacific coast from Vancouver Island south to northern Mexico and also around the Gulf coast as far east as Louisiana.

Distribution, Abundance, and Habitat Described as a migrant and occasional non-breeding visitor in The Birds of Manitoba, Greater White-fronted Geese were found in six squares along the Hudson Bay coast north of the Caribou River in late June, 2014. These birds were observed in pairs and in small groups of up to five individuals foraging and resting in treeless peatland and sedge meadows in proximity to tundra ponds (see photograph), rather than in the intertidal zone. Although the possibility of over-summering non-breeding individuals could not be discounted, the timing, number, and dispersed nature of these individuals over an area >1,000 km2, suggested local breeding. The habitat where these observations occurred is consistent with breeding habitat in the central Canadian Arctic, described as peat polygons with hummocks or tussocks, often in proximity to small water bodies, and on slopes (Ely and Dzubin 1994). There is one unpublished record of this species breeding in Manitoba: two adults and two downy young incapable of sustained fight at the mouth of Seal River on 4 August, 2004 (D. Fast, pers. comm.).

Trends, Conservation, and Recommendations The Greater White-fronted Goose has a large global population and is therefore not of high conservation concern. Nonetheless, this species is highly prized as a gamebird and some populations have declined following over-hunting (Ely and Dzubin 1994, Sullivan 2005). Although numbers are small here, Manitoba birds are currently co-managed as part of the midcontinent population with the intent of reversing previous declines (Sullivan 2005).