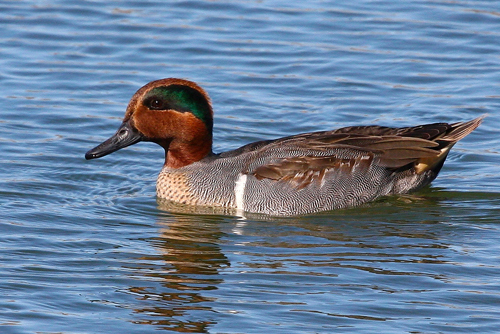 Characteristics and Range The collective term "a spring of teal" refers to the ability of this species, our smallest dabbling duck, to leap into the air before shifting into rapid forward flight. The breeding male is easily identified by the broad, iridescent green bands on its cinnamon-coloured head. In any plumage, the Green-winged Teal can be distinguished by its small bill, compact proportions, and flashy green speculum. It has a circumpolar distribution, though some authorities treat Eurasian and Aleutian populations as a separate species, Common or Eurasian Teal. North American birds breed throughout Alaska and Canada, including some Low Arctic regions, southward locally into the conterminous U.S.A., especially in the west. The winter range includes coastal British Columbia and Alaska, southward to include much of the conterminous U.S.A. (except some colder, northern regions), most of Mexico, and the Greater Antilles (Johnson 1995).

Distribution, Abundance, and Habitat The Green-winged Teal's core breeding range is in far northern river deltas and forest wetlands, rather than potholes (Johnson 1995, Baldassarre 2014). Atlas data, however, indicate similar high densities in the southwestern portion of the Prairie Potholes and the immediate coastal portion of the Taiga Shield & Hudson Plains. It is likely that the current, prolonged wet climatic cycle has encouraged short-stop migration and breeding in the south, which would explain the positive BBS annual trend in Manitoba (albeit not statistically significant). The abundance map shows broad areas of moderate abundance in central Manitoba, especially in the Saskatchewan River delta and the vicinity of Lakes Manitoba and Winnipeg, and widespread occurrence at low densities elsewhere. Numbers appear to be lowest in the Boreal Hardwood Transition and in intensively farmed regions west of the Red River, and generally low in the Boreal Softwood Shield. Computed probabilities of observation are in broad agreement with this description of relative abundance.

Trends, Conservation, and Recommendations Undisturbed, remote, core breeding areas are thought to be a key factor in this species' generally stable or increasing population trends (Johnson 1995), although BBS data show decreases in some southern portions of the range. Specific management and conservation concerns are correspondingly low, although general measures for the conservation of dabbling ducks are expected to be beneficial.