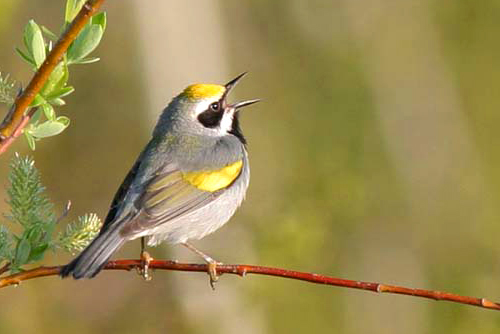 Characteristics and Range From mid-May to July, this unmistakable wood-warbler can be heard bee-buzz-buzz-ing from the canopy of open deciduous or mixed woodlands. The Golden-winged Warbler breeds in eastern forests from Tennessee north along the Appalachians, reaching southern Québec and Ontario, and west from Wisconsin to the Manitoba-Saskatchewan border. It winters in the forests of Central and northern South America, with Manitoba birds probably migrating to Central America (Kramer et al. 2016).

Distribution, Abundance, and Habitat The atlas documented a similar range to that noted in The Birds of Manitoba. Extensions included the east side of Lake Winnipeg from Grand Beach north to the Little Black River (the only detection in the Boreal Softwood Shield) and a cluster of sites in the Interlake from Mantagao Lake east to Lake Winnipeg and north to the Dauphin River, mostly characterized by stunted aspen-oak forest. Intensive survey effort confirmed the absence of this species in the extreme southern Interlake where historical records occurred (The Birds of Manitoba). The Golden-winged Warbler was found along the slopes of the Manitoba Escarpment from the Arden Ridge north to the Porcupine Hills, but not in the Brandon Hills where previous sightings have occurred, nor in theTurtle Mountains.

The Golden-winged Warbler requires early to mid-successional deciduous forests within larger landscapes of mature forest (Confer et al. 2011), limiting its distribution within Manitoba to the boreal-parkland transition. It prefers a specific habitat structure that includes herbaceous, shrub, and tree components. A few Manitoba sites are characterized by mature forest, where canopy gaps create a patchy shrub layer that is comparable to the understorey of early successional sites, or the shrubby edge of wetlands (Artuso 2009c). Atlas data show Golden-winged Warbler abundance and probability of observation are highest in the Boreal Taiga Plains, especially along the ecotone of the Boreal Hardwood Transition and the Prairie Potholes (such as the slopes of the Manitoba Escarpment). Relative abundance is only slightly lower in the small occupied area in the Interlake.

Trends, Conservation, and Recommendations While Golden-winged Warbler populations across Canada increased from the 1970s to 1990s following range expansion (McCracken 1994), BBS data show a steady decline over the last 10 years. More recently, surveys in Manitoba revealed the population to be at least 20 times higher than the "probably just a few hundred pairs" noted in The Birds of Manitoba (Artuso 2009c). Due to the rapid decline in Ontario and Québec, this species was listed as Threatened in Canada in 2006. It is also considered Threatened provincially and Near-threatened internationally. The decline of the Golden-winged Warbler may be due in part to hybridization with its sister species, the Blue-winged Warbler; however, this species occurs only as a vagrant in Manitoba and hybrid occurrences remain low (Vallender 2009). Habitat loss through a lack of natural disturbances or through human development is a threat. Even within areas of high abundance (southeastern Manitoba), aggregate mining and ex-urban development is reducing available habitat (pers. obs). This species would benefit from protection of large tracts of deciduous forests and from forest management that regenerates suitable habitat while retaining legacy trees.