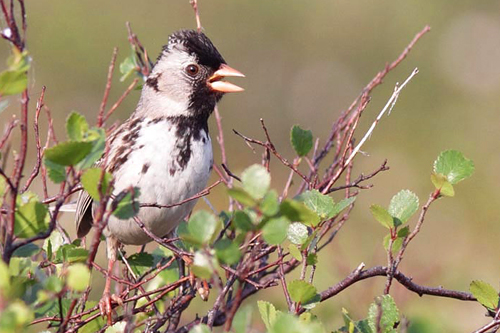 Characteristics and Range Harris's Sparrow is North America's largest sparrow and the only bird to breed exclusively in Canada. Adults are easily identified by their black face and bib, grey cheeks, and pink bill, as well as by their mournful song. Harris's Sparrow nests in a relatively broad band that skirts either side of the treeline, stretching from the Mackenzie Delta eastward through the northern Northwest Territories and southwestern Nunavut, northeastern Saskatchewan and northern Manitoba, and into extreme northern Ontario perhaps to James Bay. Historical records suggest that its range has expanded northwest of Great Bear Lake since the late 1800s (Harper 1953). This sparrow is a familiar migrant across the prairies as it moves to and from its primary wintering grounds that extend from Nebraska and Iowa to southern Texas. States and provinces west of the Great Lakes and Mississippi River have regular though infrequent winter records; it is rare farther east (Norment et al. 2016).

Distribution, Abundance, and Habitat Atlas results resemble the range estimated in The Birds of Manitoba. Breeding records of Harris's Sparrow are restricted to the Taiga Shield & Hudson Plains and the Arctic Plains & Mountains. Occasional lingering birds in the south might be confused as breeders. Studies near Churchill found the highest breeding densities in spruce/tamarack woods providing less than 30% canopy cover with a shrubby understorey; the southern extent is limited by continuous boreal forest (Norment et al. 2016). In preferred habitat, this sparrow is conspicuous and can be very common, with high abundance and probability of observation across the Taiga Shield & Hudson Plains. Nesting was confirmed in 10% of squares where the species was found, and many surveys reported an average of one or more birds per point count. Although the general area of high abundance is soundly based, further surveys are needed to verify some details of computed abundance in areas with limited field data (e.g., just northeast of Reindeer Lake and east of the Hayes River).

Trends, Conservation, and Recommendations This species was recently listed as Special Concern in Canada due to probable habitat loss in both the wintering and breeding ranges and possibly the effects of climate change (COSEWIC 2017). There are insufficient BBS data to identify general population trends on the breeding grounds. Harris's Sparrow is ranked as borderline Vulnerable in Manitoba; it has declined dramatically in the Churchill region since the 1970s (Jehl 2004; R. Koes, pers. comm.). CBC data suggest a significant range-wide population decline of almost 2% per year since 1965, with fewer birds detected in the largest wintering populations (Kansas, Oklahoma, Texas). This might be due to winter range expansion to the northwest, but other possible causes require further study. In Manitoba, climate change and isostatic rebound might degrade or reduce available breeding habitat. While Harris's Sparrow is difficult to monitor on its remote breeding range, it is conspicuous during migration, making it a candidate for citizen-based monitoring.