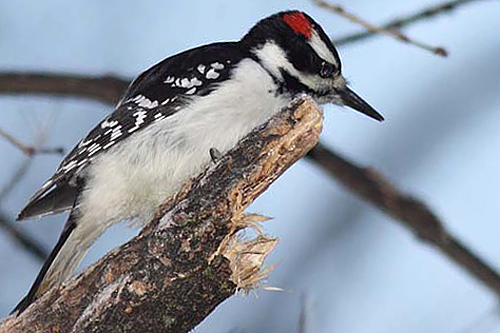 Characteristics and Range This familiar black-and-white woodpecker is extremely similar in plumage to the Downy Woodpecker, including the characteristic white stripe on the back and the male's red nape patch, but is much larger and longer-billed. It announces its presence with a strident peek or a variety of other calls, and with loud, long, rapid drumming. The Hairy Woodpecker is resident across Canada and the U.S.A. south of the treeline, with a few gaps in the west, southwest, and Texas. Its range also extends southward along the Western Cordillera, including disjunct populations as far south as Panama (Jackson et al. 2002).

Distribution, Abundance, and Habitat The Hairy Woodpecker was found throughout the province except the far north, but still ~250 km farther north than the Downy Woodpecker. The absence of detections in a few areas of intensive agriculture in the far south may not necessarily represent complete absence, because this species can sometimes use small strips of woodland. This distribution is much as described in The Birds of Manitoba, but notably farther north, to York Factory in the east and almost to the Nunavut border in the far west (Kasmere Lake). The relative abundance was highest in the southern boreal forest, with a clear decrease in the southwestern portion of the Prairie Potholes and in the Hudson Bay Lowlands. The probability of observation also suggests higher detection rates in the southern and central boreal forest. The Hairy Woodpecker uses most types of mature forest in Manitoba and can be found in proximity to all other Manitoba woodpecker species, including accompanying the two three-tœd species in boreal burns. It is noticeably less common in pure coniferous stands, where the presence of deadwood may be important, than in mixed woods (The Birds of Manitoba). It is thus not surprising that the southern portion of the boreal forest, with the highest percentage of mixed woods, shows the highest relative abundance. This woodpecker is also found in parks, towns, and cities, but is less prevalent in early-successional (shrubby or dense) habitats than the Downy Woodpecker (pers. obs.).

Trends, Conservation, and Recommendations Somewhat perplexingly, the Hairy Woodpecker is at once a common garden visitor and a denizen of old-growth forests. It's association with pristine forests has sometimes caused concern of declines due to habitat loss and fragmentation (Jackson et al. 2002), though the species remains common throughout much of its range and BBS data show an increase in Manitoba and in Canada since the 1970s. Maturation of trees in prairie cities such as Winnipeg and Brandon over the past half century may be responsible for some of this increase (Staniforth 2003).