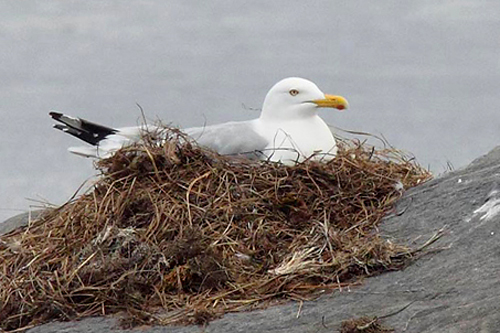 Characteristics and Range This species, the classic "seagull", is the largest breeding gull in Manitoba. Adults have light-grey wings with white-spotted black tips, and are otherwise pure white when breeding. The massive yellow bill has a red spot on the lower mandible. It takes four years for a Herring Gull to transform from dark-brown juvenile to full adult plumage. The ranges of Herring Gull subspecies and other closely related gulls form a geographic and genetic jigsaw puzzle around the Northern Hemisphere (e.g., Crochet et al. 2002). Many former subspecies are now considered full species, and some authorities (but not yet the American Ornithological Society) treat the American Herring Gull as a distinct species, L. smithsonianus. Its breeding range spans North America from Alaska to Newfoundland, including much of the southern Arctic, southward to the Great Lakes, New England, and coastally to North Carolina, but excluding large portions of the western Canadian provinces. The winter range is mostly coastal, from Alaska to Mexico on the Pacific, New England to Belize on the Atlantic, and the northern Caribbean. Inland wintering areas extend from the Great Lakes to the Gulf coast and locally farther west.

Distribution, Abundance, and Habitat Aerial surveys of Manitoba's three largest lakes in 2012 revealed an increase since the 1970s, with an estimate of 4,013 nesting Herring Gull pairs at 90 colonies (Wilson et al. 2014). Peak numbers were near the east shore of Lake Winnipeg, the largest colony (474 pairs) being at Pipestone Rocks. Related boat-based surveys in 2011 showed Herring Gull densities on small (< 100 km2) boreal lakes in west-central Manitoba to be about four times higher than on Lakes Winnipegosis and Manitoba (Wilson 2013). The atlas database includes all data from the above surveys. General atlas fieldwork revealed many additional nesting locations throughout the boreal forest and beyond, from islands in the Winnipeg River and Canadian Shield lakes in the southeast to far-northern lakes and coastal tundra pools. Analysis of atlas data suggests higher abundance and probability of observation in coastal than boreal regions, but this result may be biased by the inaccessibility of many inland colonies on large lakes. Conversely, some possible breeding records likely refer to birds roaming from colonies in other squares.

Trends, Conservation, and Recommendations Though less celebrated than egrets in this context, Herring Gulls suffered great losses to the 19th century plumage trade and by over-exploitation of eggs. Several important factors influenced their dramatic recovery in the 20th century, which reached the point that local control measures (e.g., culls and egg smashing) have sometimes been taken to limit their impact on other seabirds (Pierotti and Good 1994). Long-term trend estimates from BBS data indicate Herring Gull declines across Canada since 1970, though statistical reliability and significance are generally low (certainly lower reliability in Manitoba than the colonial surveys mentioned above). Typical BBS records are chance encounters with feeding or passing birds, often far from nesting colonies (pers. obs.). While conservation concern is generally low for this species, ongoing monitoring of all colonial waterbirds, as recommended by Wilson et al. (2014), is endorsed.