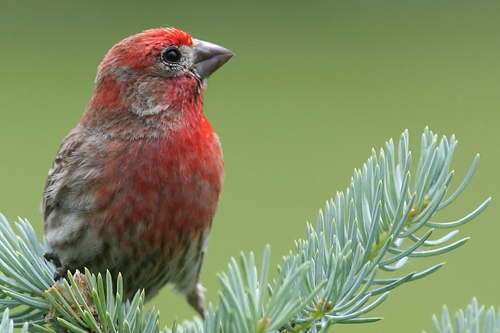 Characteristics and Range The warbling song of the House Finch, usually commencing in February, is an indicator of spring in suburban areas and rural towns. The House Finch closely resembles the more familiar Purple Finch, but males typically have a deeper red plumage, contrasting against a white belly with brown streaks; the back, wings, and rear crown are mostly brown. The brown females have more diffuse streaking and lack the obvious facial markings of the Purple Finch. The House Finch is a recent arrival to Manitoba, with the first records in the early 1980s and the first nesting reported in 1991 (The Birds of Manitoba). It is native to the southwestern portions of North America, but was introduced in Long Island, New York in 1939 (Badyaev et al. 2012). The original population has spread north and the introduced eastern population has spread dramatically westward and southward and the species now occupies most of the conterminous U.S.A., southern Canada, and northern Mexico (Dunn and Alderfer 2011). The House Finch is largely resident within this range, although northern birds move into towns or downslope (Badyaev et al. 2012), and some range-peripheral Manitoba nesters appear to retreat southward in winter (The Birds of Manitoba).

Distribution, Abundance, and Habitat The distribution recorded during the atlas period is only marginally expanded from that depicted in 2003 in The Birds of Manitoba. The northernmost nesting efforts were found around Roblin, Dauphin, and Ashern. As mentioned in The Birds of Manitoba, the boreal forest represents a significant barrier to expansion beyond these areas; however, one well-described outlier, a singing male on 23 June, 2014 in Thompson (K. Behrens), represents a "leap" of 500 km. The House Finch was most frequently detected in the Prairie Potholes, although even here it showed an affinity towards human habitation such that it was found in only 15% of surveyed squares, with smaller numbers in the Boreal Hardwood Transition and Boreal Taiga Plains. Primarily a species of suburban yards and gardens, particularly those with planted ornamental conifers, House Finches were rarely detected on point counts, such that a meaningful relative abundance map could not be generated. Similarly, they are rarely recorded on BBS routes in Manitoba, as these do not include many stops around human habitation. The highest probability of observation was in the western Red River valley, from Winnipeg south to the U.S. border.

Trends, Conservation, and Recommendations The account in The Birds of Manitoba describes the range of the House Finch as "still evolving", but the species' expansion phase in Manitoba may now be ending. Despite the increases across Canada caused by expansion, resulting in the appearance of stability in BBS trends here, CBC data suggest that this finch may be experiencing a small but persistent overall decline since ~1993 (Badyaev et al. 2012). Winnipeg CBC data show a sharp decline since 2012. Perhaps ironic, given the species reliance on human habitation, finch eye disease (mycoplasmal conjunctivitis) transmitted at bird feeders can cause population declines (Adelman et al. 2015). Snow depth, temperature, and food availability limit northern populations and govern seasonal movements (Badyaev et al. 2012). Attentiveness to hygiene at bird feeders to prevent the spread of disease is imperative for this finch, perhaps especially in northern locations such as Manitoba.