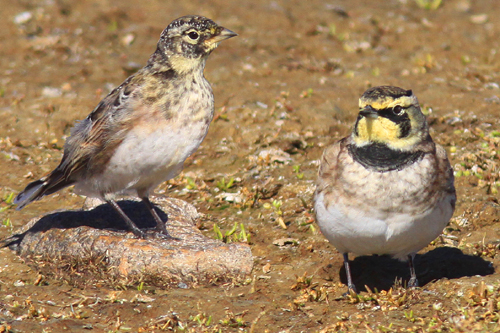 Characteristics and Range Intermediate in size between a sparrow and a cowbird, the Horned Lark is grey-brown above (males have some reddish tones) and white below, with a prominent breast band. The male's tiny "horns" are less conspicuous than his black, white, and yellow facial pattern. The only lark indigenous to the Americas, its tinkling song is among the first signs of prairie spring. It breeds almost continent-wide from Alaska and the Arctic Archipelago to northern Mexico, with a disjunct population in Colombia; forested regions are avoided, and the largest gap is in the boreal forest (Beason 1995). Arctic-breeding Horned Larks are entirely migratory, and many southern Canadian birds also withdraw southward for the winter. The species is also widespread in Eurasia, similarly divided into Arctic and temperate grassland/steppe populations, plus an isolated population in Morocco. The Horned Lark shows great regional variation, with about 42 proposed subspecies worldwide, half of them in North America; a split into one Nearctic and five Palaearctic species has been proposed (Drovetski et al. 2014).

Distribution, Abundance, and Habitat Atlas records are clearly divided into northern (mostly coastal) and southern populations, as expected (E. a. hoyti and E. a. enthymia, respectively). The southern population is largely confined to the Prairie Potholes, especially west of the Red River and south of the Assiniboine River, with peripheral occurrence in agricultural portions of the Boreal Hardwood Transition and the southern Boreal Taiga Plains. Relative to boundaries mapped in The Birds of Manitoba, there is evidence of range contraction in the south, but the inland extent along the Nunavut border is slightly greater than previously estimated. A common factor in all breeding habitats is bare or sparsely vegetated ground, be it heavily grazed, cultivated, or naturally sparse. The ground nest is constructed in a hollow excavated by the female or sometimes in a natural depression, usually in the lee of a rock or tuft of vegetation (Beason 1995).

Trends, Conservation, and Recommendations Continent-wide analysis of BBS data shows widespread, significant declining trends and few increases. While declines in some regions (e.g., northeastern U.S.A.) are attributed to the reversion of agricultural land to woodland, those on the Great Plains are poorly understood but likely linked to intensified agriculture. Historically, southern Manitoba populations expanded into newly cleared agricultural land, but these gains have largely been lost since the 1980s. Jehl (2004) described mixed trends in breeding numbers near Churchill: mostly declines but some increases in areas where tundra habitat has been degraded by burgeoning numbers of geese; however, there has been a drastic decline of nesting Horned Larks (though not a total disappearance as in the Lapland Longspur) in the immediate Churchill area (R. Koes, pers. obs.), as distinct from La Pťrouse Bay and coastal Wapusk National Park. To date, conservation effort has been aimed mostly at the Endangered "streaked" subspecies, E. a. strigata, of the Pacific Northwest (Environment and Climate Change Canada 2016), but experience gained with this race may be more widely applicable in future. A broad review of management practices related to the Horned Lark concluded: "Key to management is maintaining areas with short, sparse vegetation by burning, mowing, or grazing" (Dinkins et al. 2000). Since such measures may not be appropriate for other declining grassland species, a balanced approach is clearly needed.