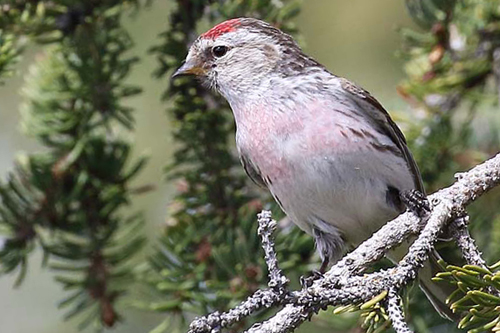 Characteristics and Range Hoary Redpolls average paler and fractionally larger than Common Redpolls. Males can be identified, especially in breeding plumage, by their white rump and undertail coverts, and the relative lack of streaking on the remainder of the underparts. When seen at close range, the shorter bill is also an identifying feature. Females and immature birds are more difficult to identify. Although currently considered a full species (American Ornithological Society 2017), genetics studies suggest that perhaps the Hoary Redpoll should be considered conspecific with the Common Redpoll (Marthinsen et al. 2008, Mason and Taylor 2015). The Hoary Redpoll ranges farther north than the Common Redpoll and like that species, its range is circumpolar. In North America it breeds from Alaska to Labrador, from the treeline north, as far as Ellesmere Island. It rarely wanders south of the Canadian/U.S. border in winter (Knox and Lowther 2000b).

Distribution, Abundance, and Habitat Sightings of Hoary Redpolls were concentrated within ~30 km of the Hudson Bay coast, around Churchill, in Wapusk National Park, and northwest of Churchill. About 66% of squares with ≥3 hours of effort in the Arctic Plains & Mountains were occupied and mean abundance was also highest in that BCR. Numbers were much lower in the Taiga Shield & Hudson Plains, the only other BCR with records. There were three outlying records far inland in the extreme north and one outlier near the mouth of the Nelson River. Jehl (2004) reported huge fluctuations in abundance and relative abundance from year to year. Breeding habitat is similar to that of Common Redpoll around Churchill, but it is more frequently found in shrubs away from trees than that species (Jehl 2004).

Trends, Conservation, and Recommendations The population trends of the Hoary Redpoll are even less well understood than those of the Common Redpoll. Its remote distribution and nomadic nature in response to food supply and conditions make assessing trends for this species exceptionally difficult (Knox and Lowther 2000b). Threats are currently poorly understood but may include climate change.