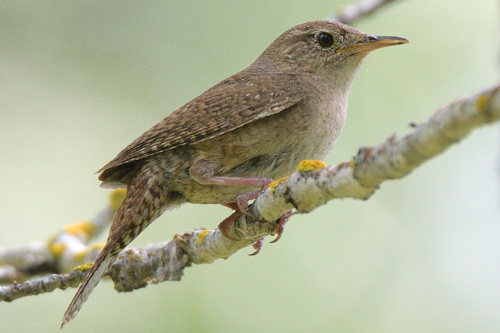 Characteristics and Range The abrupt mid-May arrival of House Wrens, with their bubbling song, brings added life to gardens, farmyards, and aspen woods in southern Manitoba. This is by far the most familiar wren in Manitoba, because of its frequent close association with people. The House Wren breeds across the conterminous U.S.A., except the coastal plain of the Deep South, and across Canada from southern British Columbia to western New Brunswick. Analysis of BBS data reveals highest abundance in an arc from central Alberta through southern Manitoba to Nebraska, and eastward to the southern Great Lakes. There is minimal overlap with the winter range, which extends across the southern U.S.A. and Mexico, with resident populations in most of Central and South America.

Distribution, Abundance, and Habitat Atlas records extend throughout the Prairie Potholes and southern portions of the Boreal Taiga Plains, and locally eastward into the Boreal Hardwood Transition; however, the House Wren rarely penetrates far into the boreal forest. Occurrence at the fringe of the main breeding range is mostly associated with human communities, including seasonal cottage areas.Point-count data revealed the highest abundance in extreme southwestern Manitoba, with somewhat lower numbers in a broad band around Lake Manitoba and southeastward to the Red River valley. House Wrens normally raise two broods in Manitoba (Zach 1982), and the extended nesting season probably enhances overall detection.

As the species name indicates, the House Wren has adapted well to low-density human habitation, whether occupied or abandoned, often nesting in and around buildings even when nest boxes are not provided, so that breeding is relatively easy to confirm. The species is not exclusively associated with humans, however, and many House Wrens occupy natural cavities in open or patchy deciduous woodland.

Trends, Conservation, and Recommendations Analysis of long-term BBS data shows a complex patchwork of increasing and decreasing trends across North America; the trend in Manitoba is persistently downward, with a reduction by more than one-third since 1970. Reasons are unclear, but likely factors include the gradual disappearance of small farmyards and associated outbuildings, shelterbelts, woodlots and shrubby habitat, as well as aggressive insect-control methods in both residential and agricultural areas. The House Wren benefits from the provision of nest boxes, the popularity of which is an effective "grass roots" conservation measure. This could be enhanced by increased awareness of suitable design and location of nest boxes.