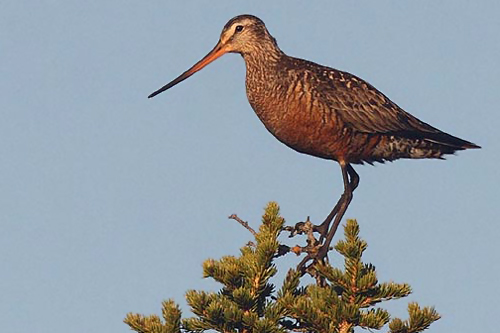 Characteristics and Range The smaller of Manitoba's two godwit species, the Hudsonian Godwit has brick-red underparts in breeding plumage and a distinctive black-and-white striped wing pattern. The breeding range consists of numerous small areas from the western Hudson Bay region to western Alaska but these are widely dispersed and the total occupied area is very small. The total global population is believed to be fewer than 77,000 individuals (Walker et al. 2011, COSEWIC in press). The winter range is also unusually small and scattered in only a few sites, mostly in wetlands within pampas grasslands and coastal regions of Patagonia (Walker et al. 2011). Preliminary geolocator data suggest that Manitoba-nesting Hudsonian Godwits winter in Argentina and Tierra del Fuego, whereas Alaskan birds winter in coastal Chile and on Chiloé Island (Walker et al. 2011; N. Senner, unpublished data).

Distribution, Abundance, and Habitat Atlas results show the breeding range of the Hudsonian Godwit to be much more widespread in Manitoba than represented in Walker et al. (2011) and extending ~90 km north of Churchill, which is depicted as the northern range limit in The Birds of Manitoba. There were no breeding records >90 km inland. The absence of detections in the six well-surveyed squares >15 km north of the Caribou River suggest that the northernmost 50 km strip of the Arctic Plains & Mountains in Manitoba is not used for nesting. Possible breeding records in four of five surveyed squares on Cape Tatnum are not sufficient to show whether nesting is contiguous in coastal easternmost Manitoba, as in Ontario (Sutherland and Peck 2007), despite the suggestion of occupancy along the entire coast from the probability-of-observation analysis.

The main characteristic of this godwit's nesting habitat is the combination of wet meadows and fens with scattered treed copses, characteristic of the treeline-tundra transition. In Churchill, where this species is well-studied, nests are typically on peat hummocks in sedge meadows, but other habitats such as wet willow and dwarf birch may be used for brood rearing (Walker et al. 2011). Despite the prevalence of these habitat types in coastal Manitoba, detections on point counts were low (exceeding one bird per point count in only one square, averaging of 0.07 individuals per point count across the Hudson Bay Lowlands or 0.2 in squares where detected), such that relative abundance could not be modelled.

Trends, Conservation, and Recommendations The Hudsonian Godwit population probably declined in the market hunting era, although the Manitoba-nesting population may have increased from 1930 to date (Walker et al. 2011). Few reliable trend data are currently available, but efforts are now underway to achieve better monitoring on the wintering grounds. Some authors have suggested relatively stable populations (Morrison et al. 2006, Senner 2010); however, a recent estimate suggests a 7% annual decline from 1973 to 2013 (COSEWIC in press). Climate change may be affecting the extent of graminoid habitat available in the nesting grounds and birds nesting around Churchill may be experiencing a mismatch in peak food availability with the timing of nesting (Senner 2012, Senner et al. 2017, Swift et al. 2017).  The tiny global population of this species makes it particularly vulnerable and in need of international stewardship.