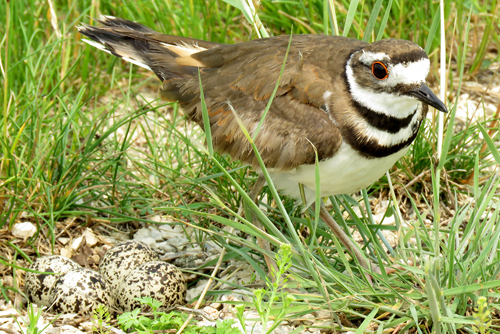 Characteristics and Range A medium-sized plover, the Killdeer is probably the most familiar North American shorebird because of its shrill calls and affinity for sparsely vegetated, human-altered habitats. It is mostly brown above and white below with two bold, black breast bands. The extensive orange rump and white wingbars are conspicuous in flight and especially during the famous "broken wing" distraction display of nesting birds. The breeding range extends from southeastern Alaska across boreal Canada to Newfoundland, south to northern Mexico, the Greater Antilles, and disjunctly through coastal Ecuador and Peru to northern Chile. Migratory northern populations withdraw from Canada (except coastal British Columbia) and much of the northern U.S.A., and the winter range extends through Central America to Columbia and Venezuela (Jackson and Jackson 2000).

Distribution, Abundance, and Habitat Atlas records extend throughout Manitoba, with representation in all BCRs, and excluding only a narrow strip adjoining the Nunavut land border, much as depicted by Jackson and Jackson (2000) and in The Birds of Manitoba. Detection rates and computed abundance and probability of observation were greatest by far in the Prairie Potholes (including the intensively cultivated Red River valley) and, secondarily, in agricultural portions of the southern Boreal Taiga Plains. On the Hudson Bay coast, elevated numbers were noted near the Nelson River estuary and in the Churchill area. Detection rates in the boreal forest, including the Manitoba Escarpment and especially the Canadian Shield, were generally low. Observations in the boreal forest were commonly associated with highways and quarries as well as lakeshores, small islands, and other sparsely vegetated areas. In the Prairie Potholes, preferred nesting habitat is along gravel roads, in drying temporary wetlands, and at sod farms, heavily grazed pastures (especially if dugout ponds are present), rural residential and institutional lawns, open parks, aggregate quarries and stockpiles, farmyards, railway tracks, and industrial areas (including flat-roofed buildings).

Trends, Conservation, and Recommendations Analysis of BBS data shows peak Killdeer abundance in a broad arc from southern Manitoba through the U.S. Midwest to Illinois and Indiana. Substantial decreasing population trends in Manitoba and Canada are statistically robust and paralleled in much of the U.S.A., but partly offset by increases in the Midwest and the southern Atlantic coastal states. Thus, while the Killdeer remains widespread and numerous, and its breeding range expanded during the 20th century, overall population trends give cause for concern. Affinity for human-altered habitats exposes the Killdeer to many environmental contaminants and to highway and other collision mortality, while nesting on gravel roofs can result in low chick survival (Jackson and Jackson 2000). On the benefit side, many property owners voluntarily protect Killdeer nests, e.g., by avoiding them during lawn mowing. Provision of secluded patches of gravel may encourage nesting in low-traffic areas. Research on the Killdeer as a "model species" for Piping Plover conservation may ultimately prove useful for conservation of the Killdeer itself (Jackson and Jackson 2000).