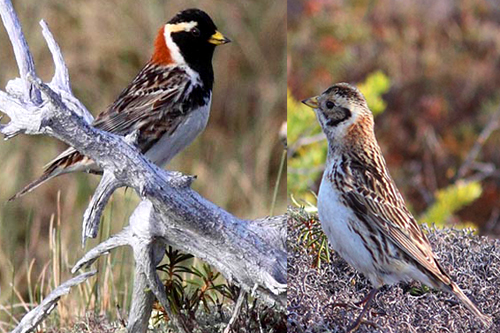 Characteristics and Range This hardy ground-dweller is one of the world's northernmost breeding songbirds. It breeds from Kamchatka to Scandinavia (Lapland) and across the Nearctic from Greenland to the Aleutian Islands, with its southernmost breeding around 55°N near James Bay. North American populations winter from southern Canada (though irregular in Manitoba) through most of the conterminous U.S.A., with the highest densities on the Great Plains (Hussell and Montgomerie 2002).

Distribution, Abundance, and Habitat Lapland Longspurs were found all along the Hudson Bay coast, and extending approximately 100 km farther inland along the Nunavut land border than estimated in The Birds of Manitoba (to Courage Lake). There was an absence of breeding records around Churchill (see below), presumed migrants being detected there as late as 13 June but not thereafter. Despite this gap, its relative abundance was remarkably high, averaging 1.3 individuals per point count in squares where detected, or 0.6 across the Hudson Bay Lowlands, the third highest average abundance for a passerine in the north after Common Redpoll (0.8) and Savannah Sparrow (0.7). This longspur was more restricted in distribution than those two species and reached an unparalleled peak of 6.9 individuals per point count in one square, and an average of 5.9 individuals per point count in the northern Arctic Plains & Mountains. Relative abundance decreased southward; however, there was also high abundance inland around Courage and Nejanilini Lakes and an area of only slightly lower abundance in Wapusk National Park.

The Lapland Longspur breeds in open terrain in northern Manitoba, typically in peat polygons, wet tundra, fens, sedge meadows with hummocks, and on flats or slopes with crowberry (Empetrum nigrum) and other groundcover. Where trees are more common, along Manitoba's ill-defined treeline, it is typically replaced by Smith's Longspur (Hussell and Montgomerie 2002).

Trends, Conservation, and Recommendations The mysterious disappearance of breeding Lapland Longspurs from the Churchill area, where it was considered the most abundant nesting bird in the 1930s, is one of Manitoba's greatest avian mysteries, matched by the drastic decline of the Semipalmated Sandpiper (The Birds of Manitoba). However, unlike the sandpiper, the Lapland Longspur was confirmed breeding in 10 squares, with probable breeding evidence found in 46 others. Possible local mechanisms of decline include shrub encroachment caused by isostatic rebound and/or climate change (Ballantyne and Nol 2015), road construction and associated hydrology constraints (Rockwell et al. 2009), and excessive grazing by geese in La Pérouse Bay (Klima and Jehl 2012).