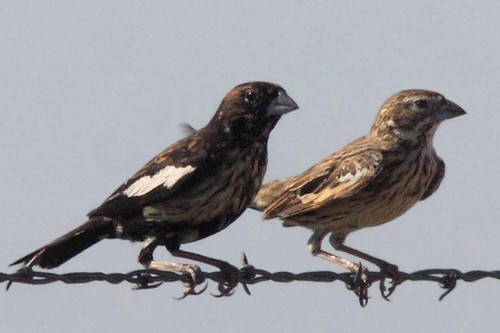 Characteristics and Range The Lark Bunting is a large-billed sparrow, slightly smaller than a Brown-headed Cowbird. The breeding male is black with bold white forewing patches and fine white tail-feather tips, while the heavily streaked, greyish-brown female suggests a burly Vesper Sparrow. The rich, complex song is delivered in flight by males popping up from vegetation in loosely colonial breeding areas. Largely restricted to western grasslands and shrub-steppe, the Lark Bunting is highly nomadic, shifting both summer and winter distribution from year to year according to moisture conditions and resulting food supply. The core breeding range is in the high plains east of the Rockies from Montana and the western Dakotas to eastern Colorado (it is Colorado's state bird). The total breeding range extends from the southern Prairie Provinces (including sporadic occurrence in southwestern Manitoba) to northern Texas and as far west as Idaho (Shane 2000). The winter range barely overlaps the breeding distribution, extending from Texas to southern Arizona and northern Mexico, including Baja California (Shane 2000). Despite its rather restricted range and short migration, strays have occurred continent-wide.

Distribution, Abundance, and Habitat Just three Lark Buntings were recorded as possibly breeding at widely scattered localities in southwestern Manitoba (western Prairie Potholes) during the atlas period: one in 2010 and two in 2012. The latter year saw major incursions into southern Alberta and Saskatchewan, and also a non-breeding stray near the Lake Manitoba Narrows (Koes and Taylor 2013c). Major irruptions in southwestern Manitoba occurred in 1964, 1980, and 1988, lesser numbers in 1989 and 1992, and only scattered individuals have been found during the ensuing, prolonged wet climatic cycle (The Birds of Manitoba). Future incursions might be expected if and when drier conditions prevail again.

Trends, Conservation, and Recommendations The Lark Bunting is categorized as a "Common Bird in Steep Decline " in the U.S.A. (NABCI 2014), based mainly on BBS data, despite the difficulty of interpreting point-count data for nomadic species (Shane 2000). It was recently designated Threatened in Canada (COSEWIC 2017d). Occurrence in Manitoba is too sporadic to merit special conservation measures, but this species may benefit from measures taken to conserve other grassland birds in southwestern Manitoba. Management recommendations for Lark Bunting conservation include the provision of large grassland areas, delayed mowing, and avoidance of heavy grazing in short-grass habitats but allowing it in tall-grass habitats (Shane 2000).