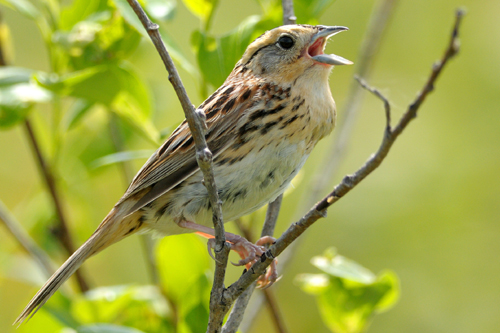 Characteristics and Range LeConte's Sparrow (formerly spelled Le Conte's Sparrow) resembles its congeners the Grasshopper Sparrow and Nelson's Sparrow, and is best distinguished by its rich buffy tones from face to flanks, sharply streaked flanks and delicately streaked upper breast, with lavender-tinted highlights on the finely streaked nape. The brief, faint, high-pitched song is challenging to detect, and often heard most clearly in the evening or at night when there are few competing sounds. The core breeding range is in the three Prairie Provinces, spilling into adjoining regions and extending eastward between Lakes Superior and Michigan. Scattered populations also occur across Ontario and central Quťbec. Its winter range is centred roughly on the lower Mississippi valley, northward to Missouri and southern Illinois, and reaching the Gulf Coast from the Florida panhandle to southern Texas, with evidence of higher densities in western portions of this range (Lowther 2005).

Distribution, Abundance, and Habitat Atlas records represent all BCRs in Manitoba except the Arctic Plains & Mountains, and they extend well beyond the estimated range limit in The Birds of Manitoba (near the northern boundary of the Boreal Softwood Shield). There were no atlas observations at Churchill, where Jehl (2004) summarized eight records between 1982 and 2003, but the most northerly cluster of inland atlas records, near Tadoule Lake, was at about the same latitude. There was also possible breeding in Wapusk National Park. There were numerous records along the Nelson River, and breeding was confirmed on the Hudson Bay coast east of York Factory. Computed relative abundance indicates that the core Manitoba range lies within the Boreal Taiga Plains and some adjacent portions of the Prairie Potholes, plus a zone of the southwestern Prairie Potholes between the Souris River and the Upper Assiniboine River valley. Essentially the same regions are highlighted in the probability-of-observation map. LeConte's Sparrow prefers sedge fens and moist grassland with dead-level terrain and usually some scattered small willows or large forbs that provide slightly elevated song perches. It often occurs at the fringes of large wetland complexes, around the transition from moist pasture to marsh. Being much more vociferous and favouring similar habitat, the Sedge Wren is often a good indicator species for the presence of LeConte's Sparrow, and both are good indicators for the scarce Yellow Rail.

Trends, Conservation, and Recommendations Currently LeConte's Sparrow is not a species of special conservation concern. Its concentration in low-boreal and transitional regions makes it less vulnerable than many grassland birds to intensive agricultural development. Slight but widespread downward population trends are indicated by BBS data analysis, emphasizing the importance of continued and improved monitoring of this difficult-to-detect sparrow. Its numbers are known to be higher in wet than dry years, though the ground nest is vulnerable to flooding after heavy rain (Lowther 2005). It has likely benefitted from the prolonged climatic "wet cycle" in southern Manitoba since the 1990s, perhaps accounting for the lower rate of decline here than Canada-wide. Periodic disturbances such as fire or haying, but not annual mowing or heavy grazing, are thought helpful to LeConte's Sparrow habitat maintenance by stimulating grass growth and deterring woody encroachment (Lowther 2005).