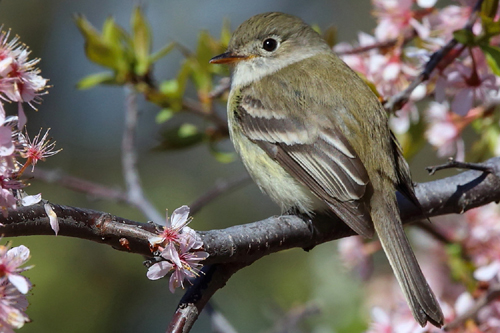 Characteristics and Range Identified by its abrupt chebec song, the Least Flycatcher is Manitoba's smallest and most abundant flycatcher. This species breeds in every Canadian province, north to parts of Alaska (rarely), Yukon, and the Northwest Territories, and south to include the Appalachians and much of the northern conterminous U.S.A. (Tarof and Briskie 2008). After migrating through central and eastern U.S.A., Least Flycatchers overwinter in early successional forests throughout the Sierra Madre Mountains from Central Mexico to Nicaragua (Holmes and Sherry 2001).

Distribution, Abundance, and Habitat The atlas documented the Least Flycatcher to be widely distributed across all but the extreme north of the province, with sporadic occurrence in riparian areas north of the range described in The Birds of Manitoba, especially along the Seal River and near York Factory. This is likely due to survey effort rather than recent range expansion. Relative abundance was found to be highest in the deciduous forest areas of the boreal-parkland transition. Some wooded sections of the Prairie Potholes southwest of Riding Mountain National Park also showed high abundance. Probability of observation showed a general pattern of decreasing northward.

Much of the pattern of higher abundance south of the boreal biome is linked to habitat, especially a general preference for deciduous over coniferous forests. The Least Flycatcher uses a variety of habitat types, being common in second growth and stunted aspen-oak woods but also breeding in mature deciduous forests, mixed woods, and mature jack pine stands. It can also be found breeding around wetlands, in burn regeneration, in rural towns, abandoned farmyards, and shelterbelts (Tarof and Briskie 2008). Its occurrence in some parts of northern Manitoba may be connected to poplar regeneration post clearing, for example along Highway 6 and the road to Gillam. In most breeding sites in Manitoba, shrub density is moderate to dense; a prime example is the wooded beach ridge of Delta Marsh with one of the highest known densities of this species anywhere in its breeding range (Briskie and Sealy 1989). Breeding density appears positively correlated with both the degree of openness of habitat and with forest patch size (negative response to fragmentation) (Tarof and Briskie 2008). This sheds light on why this paradoxical little bird is sometimes described as a forest-interior species and at other times as an early-successional species.

Trends, Conservation, and Recommendations Although long-term BBS data suggest that the Least Flycatcher has undergone a decline across Canada and in the Boreal Taiga Plains as a whole, there is no significant trend in the Prairie Potholes or in Manitoba. Despite evidence of negative impacts from clear cutting, more subtle effects of forestry and other disturbance are poorly understood and warrant research leading to management recommendations. Numbers remain sufficiently high that current global conservation concern for this species is low, though it is designated Special Concern in parts of the eastern U.S.A., for example in New Jersey and Maine (Tarof and Briskie 2008).