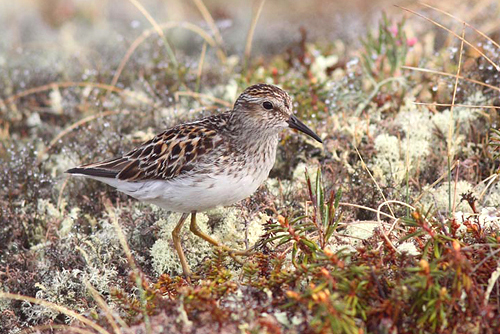 Characteristics and Range The Least Sandpiper is the world's smallest shorebird, comparable in size to a longspur, and the only peep (tiny sandpiper) in Manitoba with yellow legs. It breeds from the Aleutian Islands south to Haida Gwaii, east across Alaska and the northern edge of continental Canada, through the Taiga Shield & Hudson Plains, and as far east as Newfoundland. It winters from the southern U.S.A. to northern South America (Nebel and Cooper 2008). Recoveries of banded birds from the James Bay area in the Caribbean Basin suggest that Manitoba-breeding Least Sandpipers may overwinter in eastern South America (Dunn et al. 2009).

Distribution, Abundance, and Habitat The breeding range documented by the atlas differed little from that estimated in The Birds of Manitoba, except for a series of records, including confirmed breeding, along the Gods River north of Shamattawa and two notable southern outliers (possible breeding) near Split Lake and on the Hayes River near Oxford House. This pattern suggests at least occasional breeding in the Boreal Softwood Shield, perhaps especially along rivers. Relative abundance is predictably highest in coastal areas, decreasing gradually inland. The Arctic Plains & Mountains showed the highest abundance overall, but there was also a band of high abundance along the Nunavut land border as far west as Courage and Nejanilini Lakes. In Manitoba's Hudson Bay Lowlands overall, this is one of the most abundant shorebirds at 0.27 individuals per point count. Only Wilson's Snipe (0.35) and Lesser Yellowlegs (0.35) show higher abundance but both those species are loud and easily detected over great distances; hence abundance calculations adjusted for detection radius might show the Least Sandpiper as the most abundant shorebird. Probability of observation shows a similar pattern to relative abundance.

The Least Sandpiper breeds in sedge meadows and open peatlands in northern Manitoba. It can also use a wide variety of other wetland types including sphagnum bogs, coastal islands, brackish lagoons with peat hummocks, and lake edges (Nebel and Cooper 2008). Its abundance is likely tied to the diversity of breeding habitats used (Rockwell et al. 2009).

Trends, Conservation, and Recommendations Despite its abundance in Manitoba, the Least Sandpiper is listed as Moderate Concern in the Canadian Shorebird Plan due to declines in eastern North America, wetland degradation at stopover and overwintering sites, and contamination issues across its range (Donaldson et al. 2000, Nebel and Cooper 2008). Although data are not available for the Central Flyway, migration monitoring suggests a significant decline of 6.6% per year in the Maritime Provinces from 1974 to 2006, a significant decline in the Lower Great Lakes of 4.2% per year from 1976 to 1997, and apparent stability in British Columbia from 1997 to 2009 (Gratto-Trevor et al. 2011). It remains unclear how climate change will impact this species in the long term (Nebel and Cooper 2008).