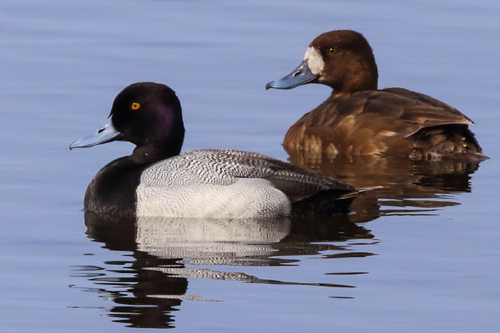 Characteristics and Range Well named for its smaller size and somewhat lighter build than the Greater Scaup, this species is best identified by head shape rather than plumage details. The Lesser Scaup's slightly peaked crown (less exaggerated than the Ring-necked Duck's puffy crest) is usually obvious, but feeding birds may appear flat-headed (thus resembling Greater Scaup) when their plumage is compressed between dives. While there is considerable range overlap in both summer and winter, the Lesser Scaup is, overall, the more southerly of the two scaup species. Unlike the Greater Scaup, its range is restricted to the Americas. It breeds in Alaska and much of Canada from the edge of the Arctic to the Prairies, and southward well into the northwestern quadrant of the conterminous U.S.A. (Anteau et al. 2014). The winter range extends from southernmost parts of Ontario and British Columbia through milder regions of the U.S.A. to Mexico, Central America, and the Caribbean.

Distribution, Abundance, and Habitat The Lesser Scaup was detected throughout Manitoba, including a few records northward from the estimated range limit in The Birds of Manitoba to the Nunavut land border, albeit within the range boundaries estimated by Anteau et al. (2014). The 149 point-count detections were weighted towards the southwest and the Hudson Bay coast, but did not yield a satisfactory relative-abundance map. Probability of detection was greatest in the western half of the Prairie Potholes, with maxima centred at Whitewater Lake and the Minnedosa potholes, the latter extending into the southern Boreal Taiga Plains. Observations were also clustered in areas of general waterfowl abundance in the southern Interlake, around The Pas, and in the portion of the Hudson Bay Lowlands between the Nelson and Churchill Rivers, with scattered records elsewhere (but breeding rarely confirmed) throughout the boreal forest. Jehl (2004) noted previously that the Lesser Scaup represents <5% of the Churchill scaup population, that its breeding status there is not well documented, and that biological differences between the two species merit further research. The Lesser Scaup nests in a variety of wetland, upland, and island settings, showing a preference for seasonal and temporary wetlands with abundant submergent and emergent vegetation (Anteau et al. 2014).

Trends, Conservation, and Recommendations While the Lesser Scaup remains widespread and common, and is therefore not a species of formal Special Concern, population declines in recent decades have presented a challenge for waterfowl managers to understand and reverse (Anteau et al. 2014, Baldassarre 2014). Many factors potentially contribute to the overall decline, including deteriorating habitat quality and availability in breeding, wintering and spring-migration areas, whereas hunting pressure appears to be relatively low (Baldassarre 2014). Despite these overall concerns, the BBS trend for Manitoba is stable, probably reflecting favourable breeding conditions in the Prairie Potholes during the wet conditions that have prevailed since the mid-1990s. Continued conservation efforts for waterfowl in general, especially on wetlands in southwestern Manitoba, will doubtless benefit this species.