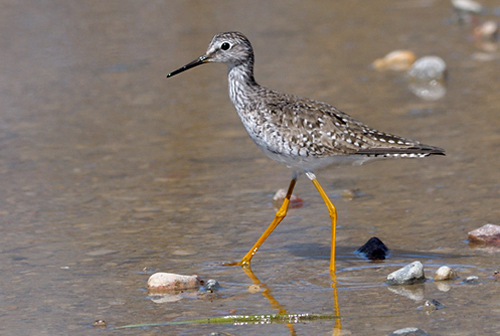 Characteristics and Range Lanky and elegant, grey and white with electric yellow legs, the Lesser Yellowlegs is very similar to the Greater Yellowlegs. In addition to its smaller size, the Lesser Yellowlegs can be distinguished from its larger cousin by its shorter, straighter, and more pointed bill, as well as its less strident call (typically with only one or two notes). The Lesser Yellowlegs nests across the northern boreal forest and the treeline-tundra transition from James Bay to central Alaska, with a southern breeding range limit around Lake Winnipegosis, a distribution that is generally more northern than the Greater Yellowlegs, albeit with much overlap. It winters from coastal U.S.A. through Middle America to most of South America (Tibbitts and Moskoff 2014).

Distribution, Abundance, and Habitat The Lesser Yellowlegs was documented breeding across northern Manitoba in almost every well-surveyed square in the Taiga Shield & Hudson Plains except in four completed squares in the treeless region >15 km north of the Caribou River. The southern range limit is very similar to that estimated in The Birds of Manitoba, reaching the Duck Mountains, Winnipegosis, and the vast, currently roadless bog between Lake St. Martin and the Sturgeon Bay Park Reserve, although it is very thinly distributed this far south. The relative abundance, mean abundance per BCR, and percentage of occupied squares all point to peak abundance in the Arctic Plains & Mountains and the coastal portion of the Taiga Shield & Hudson Plains, decreasing southward and inland, with the sharpest decrease in the Boreal Softwood Shield and the Boreal Taiga Plains. This peak abuts the peak distribution of the Greater Yellowlegs, which was most abundant from ~200 km inland and farther south, close to the boundary of the Taiga Shield & Hudson Plains with the Boreal Softwood Shield.

The Lesser Yellowlegs nests in relatively open boreal habitats such as fens and bogs, as well as well-drained sites on esker slopes and ridges, and the treeline mosaic of open peatland with scattered copses of trees. In such habitats it frequently calls from the most elevated perch available. The preference for territorial advertising from elevated perches probably influences the species' northern distribution limit. At the southern limit of the nesting distribution, this species uses relatively open wetland complexes with stunted conifers (pers. obs.). Nesting birds sometimes commute several kilometres daily to foraging sites (Tibbitts and Moskoff 2014), which may inflate atlas abundance calculations.

Trends, Conservation, and Recommendations Formerly a game species that likely declined in the market hunting era (Tibbitts and Moskoff 2014), there is evidence of continued long-term declines in Canada (Gratto-Trevor et al. 2011). Given the remoteness of much of this species' breeding grounds, recommendations for the conservation and management have included protecting key stopover and overwintering sites and the implementation of best management practices and assistance for local stakeholders such as rice producers (Clay et al. 2012). Rice fields are frequently used by shorebirds such as yellowlegs in migration and in winter and there are concerns regarding the effects of contaminants and reports of mortality from pesticides such as carbofuran (Flickinger et al.1980, Flickinger et al.1986, Littrell 1998, Strum et al.2010, Dias et al. 2014).