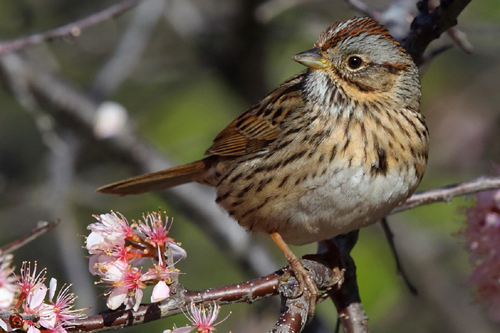 Characteristics and Range The Lincoln's Sparrow sports a handsome combination of buff, grey, and brown, accented with fine streaks. Its pleasing and varied song graces almost every shrubby bog of Manitoba's boreal forest. In the breeding season, Lincoln's Sparrow visits boreal regions from Alaska and British Columbia to Newfoundland, extending south in the Boreal Hardwood Transition around the Great Lakes and along the mountains of western U.S.A (Ammon 1995). It winters in the southern U.S.A., most of Mexico, and south to Honduras (Ammon 1995).

Distribution, Abundance, and Habitat Atlas data support the Lincoln's Sparrow range described in The Birds of Manitoba, but extending north to the Nunavut land border and being surprisingly common in the treeless tundra north of the Caribou River. This species' abundance declines from north to south with peak detection in the Taiga Shield & Hudson Plains (74% of squares with ≥3 hours of effort), somewhat lower in the Arctic Plains & Mountains (63%) and Boreal Softwood Shield (63%), and lower in the Boreal Taiga Plains (37%) and Boreal Hardwood Transition (32%). Occurrence in the Prairie Potholes (6%) was mostly limited to the partly forested edge of this BCR. The relative abundance suggested peak numbers across the northern boreal forest, but decreasing north and east of the treeline-tundra transition. There was similar abundance across the northern Interlake and in the Duck Mountains and Porcupine Hills, and to a slightly lesser extent in Riding Mountain, but decreasing southward from these areas. As noted in The Birds of Manitoba, Lincoln's Sparrow abundance may be underestimated because of its tendency to stop singing soon after sunrise.Lincoln's Sparrow is a habitat specialist preferring relatively wet sites with willow or other low shrubs (Ammon 1995). In Manitoba, it is most often found in stunted black spruce and tamarack bogs, or spruce-tamarack clumps in fens, especially where swales or small openings occur, but can also be found in mixed woods, riparian woods, trembling aspen stands with suitable understorey, and sometimes in shrubby regenerating clearcuts and disturbed peatlands (C. Artuso, P. Taylor pers. obs.). In the treeline-tundra transition, it is typically found in waterside willow and shrubby coastal fens.

Trends, Conservation, and Recommendations BBS data indicate relatively stable numbers of Lincoln's Sparrow in both the long and short term. Local populations have declined significantly as a result of some herbicide applications and have a negative response to livestock grazing and recreational activities (Ammon 1995). Manitoba's Peatland Stewardship Strategy should seek to mitigate impacts in the mossy peatlands preferred by this species.