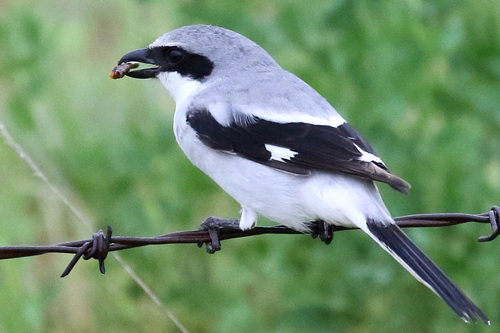 Characteristics and Range Although shrikes are songbirds, they have many raptorial traits including a predatory nature, keen vision, and a heavy notched bill. Lacking powerful feet, the Loggerhead Shrike uses barbed wire or thorny branches to tear apart fleshy prey and to impale remains for later consumption (hence the nickname "butcherbird"). The Loggerhead Shrike has an extensive but shrinking breeding range from the Canadian prairies and aspen parkland, south through the conterminous U.S.A. (except much of the northeast and northwest) to Baja California and Oaxaca, Mexico (Yosef 1996). Its winter range overlaps its breeding distribution across the southern half of the U.S.A. and is more extensive than the breeding range in Mexico (Yosef 1996).

Distribution, Abundance, and Habitat Loggerhead Shrikes prefer open habitat characterized by grasses and forbs of low stature, interspersed with bare ground and shrubs or short trees (Dechant et al. 1998). In Manitoba, most nest in scattered trees or shrubs within pasturelands, but semi-open field hedgerows, farm shelterbelts, roadsides, cemeteries, and other open mowed sites with widely scattered trees and shrubs may also be used (Collister and De Smet 1997). Loggerhead Shrikes were recorded in only 36 squares, 30 of which were in the southwest (Region 1), including 20 from Pipestone to the southwest corner of the province. Extralimital observations included two in the southeast (Boreal Hardwood Transition), one probable nesting record near Morden (confirmed breeding in 2015, Goossen et al. 2017), and one observation south of Riding Mountain National Park. There were no records in the area of north Winnipeg where a small population (intergrades of the western subspecies excubitorides and the eastern migrans, Vallianatos et al. 2002) existed until 2009; sightings in the Winnipeg region near Poplar Point and Libau likely involved transient birds. The probability of observing this species in Manitoba is now almost nil except in a thin wedge from Brandon to the southwest corner. The range is substantially reduced even from that depicted as recently as 2003 in The Birds of Manitoba.

Trends, Conservation, and Recommendations BBS data since the 1960s have revealed annual population declines for Canada and range-wide (Sauer et al 2015). Provincial grassland bird monitoring results have revealed a reduction from over 300 known nesting pairs in the early 1990s to less than 50 today (De Smet 1992, unpublished data). Listed provincially as Endangered, the Loggerhead Shrike has a dual listing in Canada, with the western (excubitorides) subspecies Threatened and the eastern (migrans) subspecies Endangered. Habitat loss and degradation, changes in weather patterns, increased nesting losses to predators, pesticides, and a variety of other factors have all contributed to this decline. Across the Canadian Prairies, the extent of native pasture declined by 39% between 1946 and 1986 (Telfer, E. S. 1993a.). In Manitoba, habitat quality has declined as few native pasturelands remain, and remnant patches are continually being converted to haylands, cropland, or tame pasture (Collister and De Smet 1997). The Canadian Recovery Strategy for the western subspecies calls for protection and enhancement of suitable breeding habitat and strategies to address threats on the breeding, migration and wintering ranges (Environment Canada 2015b).