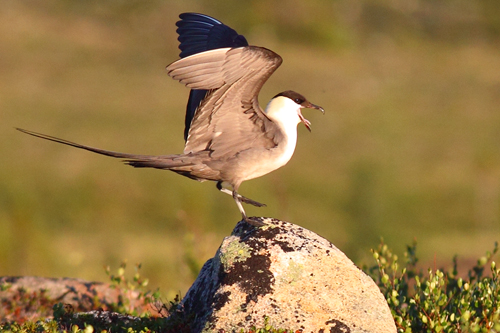 Characteristics and Range Distinguishable from other jaegers and skuas by its exceptionally long central tail feathers, the Long-tailed Jaeger is circumpolar in both its breeding distribution (Arctic and Subarctic) and in its wintering distribution (Antarctic and southern oceans). Although formerly considered only a rare migrant in Manitoba, the atlas confirmed that it nests in the open peatlands of the province's extreme north.

Distribution, Abundance, and Habitat The discovery of Long-tailed Jaeger nesting in Manitoba with seeming regularity (confirmed breeding in four squares and probable breeding in four more) was one of the great surprises of this atlas. Despite a few records of migrants and four possible breeding records, Long-tailed Jaegers were generally not found near the coast in areas dominated by nesting Parasitic Jaegers; rather, all probable and confirmed breeding records were >100 km inland, at sites with some raised topography (eskers, ridges), viz. Nejanilini Lake (where Manitoba's first nest was found by Ken De Smet and Jœl Kayer on 9 July, 2012), Schmok Lake, and Courage Lake. There was only one atlas square where both Long-tailed and Parasitic Jaeger were recorded together and Nejanilini Lake was the only area where probable or confirmed breeding was recorded for both species. This lack of overlap may be partly explained by food supply, as the Long-tailed Jaeger breeding is strongly tied to the availability of voles and lemmings, unlike the Parasitic Jaeger which has a much broader diet (Wiley and Lee 1999). Habitat differences may also be important since the Long-tailed Jaeger usually nests on more elevated and drier sites than those used by the Parasitic Jaeger, and, unlike the latter, has no preference for proximity to water bodies (Wiley and Lee 1998). Competitive exclusion by the heavier and more kleptoparasitic species, the Parasitic Jaeger, may also factor into this apparent segregation.

Trends, Conservation, and Recommendations It is very difficult to discern a trend for this species, and densities of breeding pairs can vary from year to year by factors of 15 to 25 times in accordance with variations in small-mammal populations (Wiley and Lee 1998). Long-tailed Jaegers occur in relatively high density throughout their Arctic range and the species is not currently one of high global conservation concern (Kushlan et al. 2002).  There are no obvious threats to the small, newly discovered Manitoba breeding population, which is close to the previously estimated southern range limit in Nunavut.