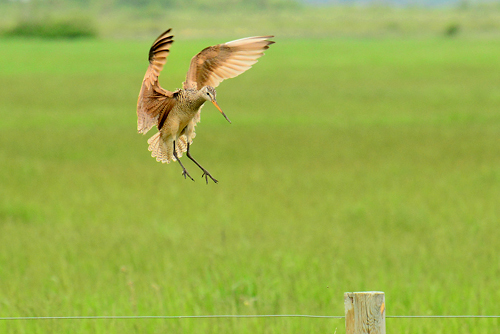 Characteristics and Range The Marbled Godwit is Manitoba's largest regularly occurring shorebird. It is easily identified by the combination of its size, cinnamon-buff underwings, long and slightly upturned bill (orange at the base and black at the tip), and strident calls. It is predominantly a grassland species, nesting from Manitoba to Alberta and south to South Dakota, with an estimated 80% of its populations nesting within the Prairie Potholes (Niemuth et al. 2013), and with small disjunct breeding populations around Lake of the Woods, James Bay, and Alaska. The main migration corridor extends through the central U.S.A. to wintering grounds along the east and west coasts of North and Central America (Gratto-Trevor 2000). Banding and tracking data suggest that prairie-breeding Marbled Godwits winter in northwestern Mexico and southeastern U.S.A. (Gratto-Trevor 2011, Olson 2011).

Distribution, Abundance, and Habitat As depicted in The Birds of Manitoba, the Marbled Godwit nests throughout the Prairie Potholes, north through the Boreal Taiga Plains (although the distribution is patchy in the northern parts of this BCR), and east into agricultural portions of the Boreal Hardwood Transition such as the Whitemouth River valley. There were no records in the Boreal Softwood Shield. Atlas results show three peak areas of relative abundance: the southwestern mixed-grass prairie as far north and east as Brandon, the southern Interlake between Lundar and Lake St. Martin, and the Tolstoi Tall-grass Prairie Preserve and surrounding area. The probability of observation shows a similar pattern but is also relatively high in the Westlake Plains. Within Manitoba, this tall shorebird nests in moderate to high abundances in native grasslands and human-altered habitats such as sewage lagoons, haylands, and even in some cropland such as grain, flax and stubble fields (The Birds of Manitoba, Gratto-Trevor 2000). Nesting can occur in uplands and large pastures at a considerable distance from water. The Marbled Godwit is absent from large swaths of boreal forest, and many of the northernmost and easternmost records in Manitoba are in areas where some agricultural clearing has occurred such as in the Carrot River and Whitemouth River valleys.

Trends, Conservation, and Recommendations The Marbled Godwit suffered significant losses from market hunting, and then began increasing following the Migratory Birds Convention Act in 1916, though it has not regained former population levels (Gratto-Trevor 2000). BBS data suggest a small but significant decline in Canada since 1970, and within the Prairie Potholes as a whole, despite apparent population stability in Manitoba. Habitat loss in some areas may be partially offset by gains following agricultural expansion at the periphery of the species' nesting range. The Marbled Godwit is ranked as high conservation concern in both the U.S. Shorebird Conservation Plan (Brown et al. 2001) and the Canadian Shorebird Conservation Plan (Donaldson et al. 2000). Better research and monitoring of this species, as with other grassland shorebirds, is urgently needed, especially in regards to whether some agricultural activities create population sinks as a result of frequent nest failure (Gratto-Trevor 2000).