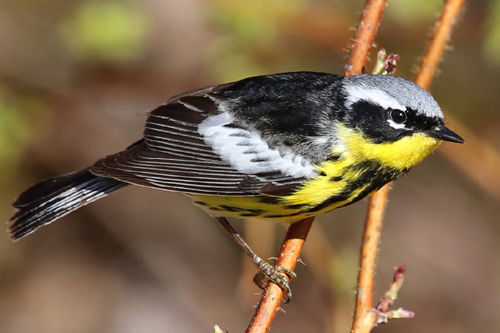 Characteristics and Range The Magnolia Warbler is a medium-sized wood-warbler with conspicuous bold black streaks over a bright yellow breast, yellow rump, and dark back. This long-distance migrant winters in Central America and the Caribbean, its migration movements spanning the eastern half of North America. It spends summer mainly in Canada, predominantly through the Canadian Shield; south to New England, the northern Appalachians, and northern Great Lakes states; west to the northern Rocky Mountains; and north to the southern fringes of the Northwest Territories and Yukon (Dunn and Hall 2010).

Distribution, Abundance, and Habitat The atlas distribution of the Magnolia Warbler is very similar to that shown in The Birds of Manitoba. Subtle differences include possible breeding records from the southern Interlake and confirmed breeding records extending slightly farther west towards Winnipeg than previously documented. The core areas with the highest abundance are located in the Boreal Softwood Shield and the Boreal Taiga Plains wherever dense, young coniferous and mixed-wood forests are found. The Boreal Hardwood Transition contains the highest proportion of occupied squares, which suggests a wider distribution and occupancy, but mean abundance is less than half that in the core areas. The low relative abundance and very sparse distribution of the Magnolia Warbler in the Prairie Potholes is tied to the limited availability of contiguous forest and, in particular, small spruce and fir trees, which it depends on for nesting (Taylor 1983, Dunn and Hall 2010). The abrupt northern range boundary lies towards the northern edge of the Canadian Shield, where forest canopy cover is substantially reduced.

Trends, Conservation, and Recommendations Range-wide BBS trends show this species is stable to moderately increasing since the 1970s, but with increases concentrated mostly in eastern North America and evidence of declines in much of northern Ontario and western Canada. There are few data on the relative importance of causes of mortality that include predation of eggs and young, collisions with buildings and structures, degradation of breeding and wintering habitat, and possibly pesticides (Dunn and Hall 2010). Future local population changes may follow periodic outbreaks of spruce budworm (which the Magnolia Warbler is known to consume in large numbers when available), the natural succession of forests or logging activity affecting the density of small conifers preferred for nesting, and abnormally cold or wet periods that may depress numbers.