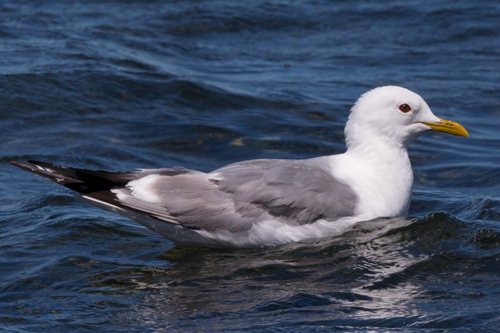 Characteristics and Range The Mew Gull is similar to the Ring-billed Gull, differing primarily by its smaller size and all-yellow bill. Three forms exist: the European Common Gull, the northeast Asian Kamchatka Gull and the North American Mew Gull. Subtle differences among the three lead some authorities to consider them separate species (Moskoff and Bevier 2002). Mew Gulls breed from Alaska to northeastern Saskatchewan and south to British Columbia. They winter primarily along the Pacific coast, as far south as Baja California. Nests have been found at Wollaston Lake, Saskatchewan and birds have been seen at Reindeer Lake (Nero 1967). The species was found to be a regular spring migrant in small numbers in the Lynn Lake region in the 1980s (Wright 1988). In 1980 a pair bred, unsuccessfully, near the former dump at Churchill and another pair was present nearby at the same time (Jehl 2004).

Distribution, Abundance, and Habitat Sightings during the atlas period were scattered across northern Manitoba, as far south as the Zed Lake area (near Lynn Lake) and as far east as Wapusk National Park. Most occurred in the Taiga Shield & Hudson Plains, with a smaller number in the Boreal Softwood Shield. No confirmed breeding was recorded, but presumed pairs were seen in suitable habitat at Big Sand Lake, Kasmere Lake, and Nueltin Lake, and the species was tallied on no fewer than eight point counts in one square along the Broad River in Wapusk National Park. There is much unexplored terrain in the north, so accurate abundance is impossible to establish; the species seems to be widely but very thinly spread in Manitoba, at the eastern edge of its breeding range.

Trends, Conservation, and Recommendations The species is listed as Least Concern globally and it is not listed in Canada. Its occurrence in Manitoba is too limited for meaningful recommendations here.